Ireland keen to seize their huge opportunity against Ukraine 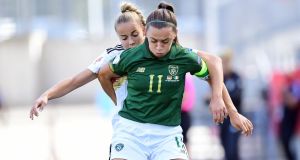 The widespread goodwill towards it has sometimes resulted in this Irish team’s prospects of qualifying for a first major championship being slightly overblown but as they prepare to take on Ukraine on Friday afternoon, Vera Pauw and her players really do have a clearly identifiable path to the next European Championships. Get a result at the Obolon Arena in Kiev and a playoff next April is guaranteed; win and there may still be scope to qualify automatically.

They will, as the manager says, “have to fight for it” but having beaten group stage second seeds for the very first time when Ukraine came to Tallaght last year, this really does look to be the team’s best opportunity yet to earn their place on a major stage.

It would be an overdue reward for the side’s long established stars, a group that has shown commitment to the cause in ways their male counterparts have never been required to. The side has clearly come a long way since finishing fourth four years ago or even third to two significantly better sides in the last qualifying campaign.

As they showed when drawing in Greece and in the 3-2 defeat of these opponents, however, they retain a weakness for surrendering soft goals and their ability to address that now seems likely to be a major factor in whether they can take the giant leap forward they have all been striving for.

“We gifted them [Ukraine] the goals in Dublin and so eliminating our mistakes is definitely something that we have looked at,” says team captain, Katie McCabe. “We can’t underestimate them, they’re a tough, physical side and they obviously had a great performance against Greece [who they beat 4-0 last month] but we will be well prepared.

The build-up does seem to have gone well and so confidence is high enough for everyone to allow themselves imagine the team making the breakthrough with McCabe clearly excited by the idea of leading an Irish side at the finals.

“It’s not just as a captain,” she says. “It’s as that little girl growing up, to be achieving the dream of going to a major tournament and to share that with all of my team-mates. That would be something that I would never forget.

“We’re on the cusp of something that’s never been done before. We can’t get too far ahead, though. We’ve talked about the ‘what ifs’ but it is about getting the job done and that is what we are focused on. We still have to play the game but to possibly achieve that would be fantastic.”

Pauw expects to have a full squad to choose from while the hosts have, just a matter of weeks after their men’s squad was so badly hit by coronavirus they had to name their goalkeeping coach on the bench for a game against France, a number of cases to contend with.

“We are aware of reports of Covid cases in the Ukraine squad, but we are just focused on ourselves,” says Pauw. “The qualifying campaign has gone well so far for us and we have improved along the way, however this is now when it matters most. We need to get a positive outcome from Friday’s game to keep the dream alive of qualifying for the European Championships.”

Ukraine need to win to keep their own dreams of qualifying and the ease of their win over the Greeks will have bolstered their own levels of belief. It is a big game for both sides then but a huge opportunity, despite the scale of the challenge, for Ireland.