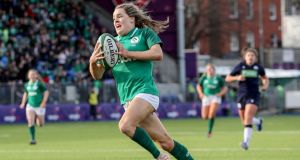 Ireland’s Beibhinn Parsons finishes off a length of the pitch try during Ireland’s Six Nations match against Scotland at Donnybrook. Photograph: Dan Sheridan/Inpho

Ireland held off a spirited fightback from Scotland at Donnybrook to kick-start their Women’s Six Nations Championship with a morale-boosting win.

After developing a 13-0 buffer during the early stages, Adam Griggs’s charges looked set for a comfortably day at the office. They subsequently encountered a strong Scottish resistance but thanks to tries by Cliodhna Moloney, Sene Naoupu and teenage prodigy Beibhinn Parsons, they ultimately recorded their first competitive victory in just under 12 months.

Ireland had initially set out their stall to attack Scotland from all angles and an early penalty courtesy of outhalf Ellen Murphy was the ideal settler.

Moloney was making a welcome return to Six Nations rugby and pounced for the game’s opening try after 10 minutes.

Following excellent approach work by the impressive Anna Caplice, Moloney powered over the Scottish line in the right corner. While Murphy’s touchline conversion was wide of the mark, Ireland were visibly growing in confidence with each passing minute.

After Ciara Griffin was initially snuffed out close to the posts, the ball was transferred out wide for Naoupu to dot down in clinical style. Though Murphy’s bonus kick was once again off-target. the two-time champions appeared in full control of their own destiny.

However, with former Ireland head coach Philip Doyle at the helm, Scotland were never going to be short of endeavour. They enjoyed a sustained period of possession as the action progressed and after Moloney was removed with a head injury on 27 minutes, they threatened to get on top of the Irish set-piece.

Their persistence paid off when Scottish inside centre Lisa Thomson burst through a defensive gap for a stoppage-time try and Helen Nelson supplied the extras to leave Ireland’s interval lead at 13-7.

Ireland suffered an additional set-back when their skipper Griffin was replacing at half-time, with debutant Dorothy Wall deputising for the Kerry native at blindside flanker. The teenager’s robust approach and ball-carrying capabilities added a certain dynamism to the Irish play, though they increasingly found themselves under the cosh for large stretches of the second period.

Moving into the final quarter, Scotland were permanently camped inside the Irish ‘22’ and Hannah Smith was held up just shy of the try-line.

Yet just when another Scottish try seemed inevitable, the tables were drastically turned. Parsons intercepted a loose pass from Sarah Law and sprinted the full length of the field for a spectacular five-pointer.

Although this unconverted effort offered Ireland some breathing space, there was a final push left in the plucky visitors. After replacement tighthead Leah Lyons was sent to the sin-bin, Scotland were presented with a five-metre attacking scrum.

Despite the re-introduction of Linda Djougang to the Irish frontrow, Scotland lock Emma Wassell exploited the extra space to cross the whitewash. Law superbly split the posts on the left wing, but Ireland dug deep in the closing minutes to seal their triumph.