Ideal opportunity for the Women’s Super League to prosper 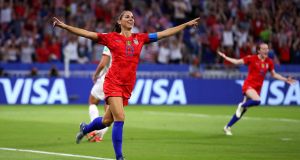 Alex Morgan of the USA celebrates scoring against England in the World Cup semi-final in 2019. The high profile American star has now joined Tottenham Hotspur in the WSL. Photograph: Richard Heathcote/Getty Images

Late last week, while the majority of football fans were getting ready for the start of the new season, Spurs pulled off a completely unexpected transfer coup.

Out of the clear blue sky, they signed a double World Cup winner, an Olympic gold medallist and, importantly, a marketing department’s early Christmas present. Their new striker is not only Fifa video game cover star, splitting the billing with Leo Messi, but comes with a social media following that comfortably outstrips Tottenham’s existing base.

The player is Alex Morgan, co-captain of the US women’s team and the latest of a wave of players from the elite layer of the game to pitch up in England. From the American team that won the World Cup in the summer of 2019, five have joined English teams in the past month. Morgan is following in the slipstream of Rose Lavelle and Sam Mewis (Manchester City) as well as Tobin Heath and Christen Press (both Manchester United).

It isn’t just American players either. Chelsea broke the world record fee for a female footballer when they signed Danish forward Pernille Harder from Wolfsburg after the Champions League final.

Lucy Bronze, England’s best player, has returned to home soil after winning three Champions League titles with Lyon. Likewise Denise O’Sullivan, Ireland’s all-action midfielder, has gone to Brighton after winning back-to-back titles in the States with North Carolina Courage. Sam Kerr, the all-time leading scorer in both the American and Australian leagues, predated them all by joining Chelsea back in January.

Okay, so that’s a long string of names. So what?

Well, to put it in context, when The Guardian compiled its 100 Best Female Footballers in the World list last December, only one of the top 10 played their club football in England. That tally is up to five now.

If you broaden it out to the top 20, the number has gone from three to nine. The Women’s Super League (WSL) is only nine-years-old but it has, more or less overnight, grabbed the wheel of the women’s club game for itself.

Like all major cultural changes in the world right now, the pandemic has something to do with this. When we were all sitting around in the middle of the spring and gaming out the future of various sports in a suddenly uncertain world, nobody saw the earthquake that was coming for women’s soccer.

The pre-eminence of the American league (NWSL) looked untouchable, all the more so when it made headlines for being the first professional sports league in the US – male or female – to return to play contact sport.

The NWSL played a one-off, eight-team tournament over a month from the end of June through July and called it The 2020 Challenge Cup. It was a relative success, too. Being first brought a certain level of exposure in a country that was parched for team sport at the time.

Most importantly, they got it completed, playing behind closed doors in a bubble in Utah and creating a model for the bigger leagues in men’s sports to follow and work off.

But it had its hiccups too. Morgan’s team, Orlando Pride, had to pull out on the eve of the tournament after 10 positive Covid tests between players and backroom staff. A raft of high-profile names didn’t take part because of Covid concerns. And ultimately, it reduced the season to a month-long tournament. Which was fine for what it was and a small miracle given the times. But thin gruel when you’re talking about the most high-profile women’s sports league in the world.

Last week, the NWSL kicked off their Fall Series, a nine-team tournament played over the course of seven weeks. A lot of the squads have been decimated since the Challenge Cup in July and with each team only guaranteed four games, it feels a little like playing a tournament for the sake of playing a tournament. It is small wonder that the likes of Morgan, Heath, Lavelle and the others have gone off in search of something more stimulating for now.

All of which makes this a potential tipping point for the women’s club game. Ostensibly, the American players are only going to England for a single season. The Olympics are still on the calendar for next summer and the best American players need gametime. So although they are still contracted to the NWSL, US Soccer are happy enough for now to let them go. Whether they all come back when the season ends next May is another matter.

For the Women’s Super League, the iron has never been hotter. It remains to be seen what sort of strike they manage. While anyone who has followed women’s sport down the years knows all too well the dangers of announcing new dawns, it’s clear that there is some sort of moment here for women’s football in England.

Put it this like this. Two years ago, Man United was the best possible name for the red team in Manchester, given that one of the world’s most famous sports clubs shamefully didn’t have a women’s team. Now they’re backboned by three players from last year’s World Cup final. Even at that, they’ll most likely be in the chasing pack behind City, Chelsea and Arsenal in the title race.

As ever, the bar is set bar unfathomably high as a society when it comes to women’s sport. As Elaine Buckley pointed out in the 20x20 film that went up online last week, Katie Taylor was already a five-time world champion and it wasn’t good enough for us. She had to basically invent women’s boxing as an Olympic sport and go and win a gold medal before she got to stand on a stage for a homecoming.

There’s a bit of that here, with the WSL needing to import a job lot of the best players in the game’s history before anyone will give the league a second look. And even then, we know it won’t be enough. Not straight away anyway.

But the English league has a huge opportunity here. There is a Venn diagram with uncertainty of the NWSL’s future in one circle and the nascent but growing cultural embrace of women’s sport in the UK in the other. The WSL is in the sweet spot right in the middle.

How sweet they make it is up to them. Chances like this don’t come along too often.