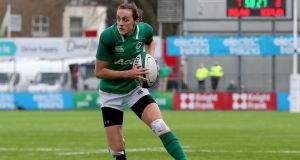 Hannah Tyrrell: “I’ve been in the Sevens six years now. It’s a big commitment, and the plan is to focus on the 15s for the next few years, with the World Cup coming up in 2021.” Photograph: Tommy Dickson/Inpho

There is a difference between New Year resolutions and priorities and Hannah Tyrrell sounds perfectly clear on both.

No stranger to the demands of top level sport – rugby now, soccer and Gaelic football previously – she’s every bit as resolute about that part of her life for the year ahead, only there is a natural change in priority too.

She’ll be 30 later this year, which marks a major milestone in her career. And Tyrrell also celebrated the first day of 2020 with a new engagement of another sort – to her partner. Her own mental health will always be another priority but something is about to give.

Since her electrifying debut season in the 2015 Six Nations with the Irish women’s rugby team, winning the championship, Tyrrell has also been committed to the Sevens game, though not always in sync. The Sevens became the priority in 2017, and again last year, with Tokyo Olympic qualification in mind, only after that fell short she’s now back committed to both teams.

“With the Sevens right now, it’s Monday to Friday, with the Irish 15s at the weekend, so this time of the year is particularly busy,” says Tyrrell .

“I’m contracted with the Sevens, and that’s the day job, essentially, and later this month we’re back on the HSBC Series, to New Zealand and then Australia, which means I’ll be away for the first game in the Six Nations [against Scotland].

“We’re back the week of the Wales game, so we’ll see. But if I’m healthy and 15s coach Adam Griggs wants me then I’ll definitely play. I still love the 15s, and any chance I get want to play, but I love Sevens as well, and whenever they do clash, Sevens has to be the priority.

“The World Sevens Series takes us around the world really, for most of the year. Last year, being an Olympic qualifying year, all the focus was on the Sevens, so I haven’t actually played Six Nations since 2018. The Sevens Series is a big deal for us, and our aim is to keep improving, keep moving up the rankings.”

After back-to-back Series dates in Dubai and Cape Town in December, the next two legs take place in Hamilton (January 25th/26) and then Sydney (February 1st/2nd), with the Irish Men’s Sevens also involved, still in the chase for Tokyo qualification.

“Our chance ended last July, essentially, when England knocked us out of the qualifier [in Kazan] in the quarter-final, and took the place. Qualifying from Europe is very difficult, with Spain, Russia, France, all very strong, competing for one or two spots. It was basically winner-takes-all last summer, and England beat us and went on to win the tournament. There is World Repechage, not until June, very close to Tokyo, when the men still have a chance. But our chance is gone.

“For the next Olympics, in Paris, France will qualify automatically, taking out one of those teams, so it hopefully improves our chances. Although I will be retired by then”

As is her style, Tyrrell volunteers this information without prompting.

“Well, I’ve been in the Sevens six years now. It’s a big commitment, and the plan is to focus on the 15s for the next few years, with the World Cup coming up in 2021. So the plan is to retire at the end of this season, get a ‘proper job’, as people might say. When you’re trying to pay the mortgage, as much as I love the game, it’s not a lot of money, you can’t do it forever.

“We’re all contracted, semi-professional with the IRFU, like say the provincial and Irish men’s players, except we’re only IRFU. We’re not contracted provincially. You look at the next trip, Hamilton straight to Sydney, that’s 19 days on the road.

“I’m a teacher by trade, and still do some subbing, but if you’re away for those two or three weeks you miss that too. That’s the commitment we make, but I think I’m ready to move on, and will finish in the summer. It’s tough on the body, with very little off season,

“It’s well known that the highest contract in Sevens, men and women, is €18,000. There’s a small bonus for the trips you get to go on, and whatever small sponsors are out there, but that’s rare. It’s still a great opportunity to play rugby, to travel the world, especially if you’re starting out from college. And for a while that’s what I was like. But there does come a time when it’s not enough. It has improved from two years ago, when we were on a bursary, very varied. But I think for next year it has to go higher again.”

The one priority that is a constant in her life now is her mental health. It wasn’t long after that 2015 Six Nations-winning season when Tyrrell first spoke about her own struggles during her teenage and college years in Dublin, often manifested in severe self-harm and sometimes crippling eating disorder, her experiences later part of the IRFU’s Tackle Your Feelings campaign.

Keen to keep that subject a priority, she’s lent her name to other campaigns since, and will feature in this Saturday’s First Fortnight panel discussion on sport and mental health, along with Irish 400m record holder David Gillick and former Leitrim footballer Colin Regan, GAA community and health manager.

“When I first mentioned my mental health struggles, I’d never planned it, and it just went from there. I’ve been involved with a few projects since, such as Pieta House, who were very helpful to me. It has also been a great healer for me, to help understand what I’ve been through, and to hear people tell me it’s been helpful for them.

“I also think it’s still very much a taboo subject in sport, there’s still a stigma there. And not just in sport. Although I think sport has helped change the game massively, with more and more people speaking out. It depends on generations too, but I think sport can also help people when it comes to any mental health struggles, help them overcome it, because I know that was a big thing for me.

“And I can better rationalise it now, see it differently, instead of looking at the negatives. What I always say as well is that everyone will struggle with their mental health at some point, maybe a day, a week, and for different issues. For me it was a longer time, it’s how you deal with it, that’s what I discovered, to seek the help to work a way out of it.”

Another prioritised step in that process took place on New Year’s Day, during a hike in Glendalough with her partner, Sorcha Turnbull, which ended with their engagement.

“Very happy times,” she says. “For anyone who has known me the last few years, or throughout my life, I’ve never been happier, with a wonderful fiancée, a great house, a great job, a great family, and things set up for when I leave rugby. Now, if you’d said that to me six or seven years ago, that this is where I’d be at, no way would I have believed it. But here I am, and it’s brilliant.”