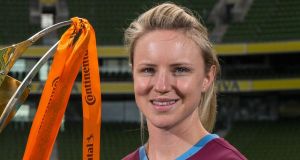 Ruth Fahy was working in the legal department of the FAI when she wrote a newspaper column condemning the treatment of the Ireland women’s team. Photograph: Cathal Noonan/Inpho

Not too many heroes are to be found between the covers of Champagne Football, the remarkable account of the rise and fall of John Delaney and the Football Association of Ireland by the Sunday Times’ Mark Tighe and Paul Rowan. The string of text messages that she’s received since its publication, though, have been very firmly telling Ruth Fahy that she is one.

“They were lovely messages,” she says, “lots from players too, which meant so much.”

How did you feel when you read the chapter on your experience with the FAI?

“I just felt, ah, pure vindication. It was a nice sense of relief, really. I’m proud and honoured to be part of it.”

As Tighe and Rowan recounted, Fahy was working for the FAI’s legal department in 2017 when the Irish women’s squad made a public stand against its treatment at the hands of the governing body, their spokesman Stuart Gilhooly describing them as the “dirt off the FAI’s shoe”.

At the time, Fahy, who had enjoyed a successful club career in Ireland, notably with Wexford Youths with whom she had won the treble the previous year, was working as a pundit on women’s football for RTÉ and had a column in the Daily Mirror. She knew if she used the column to express support for the players, she would most likely lose what she described as her “dream job”. But she did it anyway. And she lost that job.

“I’m the most indecisive person, I have so many doubts about everything, but I had absolutely none about doing what I did,” she says. “My whole life had been playing soccer and feeling those feelings of frustration, so it was way more important to me writing that column than holding on to a job in a place where something didn’t feel right any way.

“I just remember looking at Twitter that day and seeing that the Irish women were holding a press conference at Liberty Hall. They were taking a stand. There was a rush of emotions for me, I felt so proud of them. I just wanted to support them, at the very least to commend them for what they were doing. There were so many in the FAI who wanted to openly support them too, but they just couldn’t. I tweeted that I was proud of what they had done and I had a couple of people say to me, ‘Jesus, be careful’.”

I didn’t talk about it to anyone. I had good friends in the FAI but I didn’t want to get them involved

She went ahead and wrote her column, saying that none of the revelations from the players had shocked her. “Their grievances,” she insisted, “were valid and warranted”, but that those with the power to improve their lot were “dismissive”.

The next day in work, she was summoned to her manager’s office and, as she related to Tighe and Rowan, was told “she had brought the FAI into gross disrepute with her column and that she was in breach of her employment contract”.

She was told she was suspended, but instead she presented a letter of resignation that she had prepared, knowing that this would be the end of her FAI career. Eventually, her resignation was accepted, the details of how the FAI dealt with her through the process worth the price of the book alone.

To top it all, she then received an email from an FAI official who warned her that she would be “barred from future media work” and there would be “no more TV appearances”. “I wasn’t really shocked about the rest of it, but that did shock me,” she says, “but thankfully both the Mirror and RTÉ kept using me.

There are so many opportunities for the FAI, but they’re always reacting to things instead of being proactive

“But I did feel completely alone at the time. I didn’t talk about it to anyone. I had good friends in the FAI but I didn’t want to get them involved. If I had spoken to them about it they would have been asked questions then, and made to feel extremely uncomfortable.”

Her only regret now is that she should have handled it in a way that would have made it more difficult for the FAI to punish her. “I don’t think I played it very well, as a law graduate I should have known better. I should have kept my emotions in check, but I allowed them come in to it. There were tears, I told them I didn’t care, basically, that I stood by what I wrote. It was just an emotional time, it felt very personal, I actually wanted to be with the players that day at Liberty Hall, to stand with them.

“The hardest thing to read in the book was about John Delaney’s golden handcuff agreements, the amount of money involved. Then you had the opposing visual of the women’s team changing out of their tracksuits in public toilets at the airport and then grabbing a bus home after a long, arduous trip abroad. Just nauseating.

“I hadn’t realised how much work Emma put in in the background,” she says in reference to Emma Byrne, the former Irish goalkeeper who led the campaign to get fairer treatment from the FAI. “She had been pushing for years. She never got a chance to play in a major tournament, but money couldn’t buy the legacy she left. It could stand to our women’s teams for decades.

“It laid the groundwork, but there’s so much more to do. There are so many opportunities for the FAI, but they’re always reacting to things instead of being proactive. The women’s team get paid around 12 per cent of what the men get in appearance fees. That is such an easy fix, it’s a small thing that could do wonders, even for the FAI’s own reputation. And symbolically, it would be so important.”

I’m not sure you can ever bury the past, but you can put it to the side and move on

While she will qualify as a solicitor in two months’ time, football remains the Galwegian’s unrivalled passion, and she hopes to continue with her career in the media, her ultimate dream to have a major tournament match involving Ireland to co-commentate on as part of her work with RTÉ.

“Next month’s game against Ukraine is absolutely massive. If they could qualify [for Euro 2021], I think it would be everything. They’re knocking on the door and the gap is narrowing every year.”

For now, she just trusts that there are better days to come in the running of Irish football. “You can’t get worse than what’s in the book, my jaw was firmly on the ground, so the only way is up,” she says. “I’m not sure you can ever bury the past, but you can put it to the side and move on. Hopefully in the future we can look back on it and be proud of how far we’ve come. Can it be fixed? Yes. There are so many good people working in the FAI, which is important to say. They are amazing staff who are so passionate about the game, some really talented coaches, but they have to be given the support to reach their potential.”

Does she see herself working for the FAI again?

“I’d love that. That would be amazing. It was a definite closed door the last couple of years, but now you never know. Maybe. One day.”