Ellen Keane pining for the water but refusing to lose focus 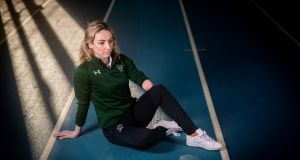 She’s been dreaming of waking up in a waterbed, and if that wasn’t strange enough her morning weights session now include bottles of spring water attached to the bench press bar.

You can take Ellen Keane out of the water, but you can’t take all the water out of her 2km radius, even when that’s entirely on dry land.

Of all our Tokyo hopefuls, Irish swimmers have perhaps been most impacted by the latest restriction to contain Covid-19: unless they live within 2km of an open sea or deep river - or dare we suggest a swimming pool in their own back garden - then nothing comes close to replicating their usual training routine.

For Keane, already well into the hard training for what will be her fourth Paralympics, the decision to defer those Games into 2021 has brought some respite. Not that she can now sit at home all day binging on Netflix.

“No way, I would go insane if that was the case,” says Keane, who turned 25 on Monday and swam in her first Paralympics in Beijing in 2008 at age 13. She won a bronze medal in the 100m breaststroke in Rio 2016, and European gold in the breaststroke two years ago.

She’s spent the best part of her life, in other words, in the water, typically twice a day and usually with her coach and other swimmers for company. Up until last Friday, Sport Ireland kept their facilities open to Tokyo hopefuls, before the 2km restriction on exercise and non-essential travel put an end to all that. She’s not complaining and entirely understanding of it too in the face of something like Covid-19.

“Where I’m living live now, basically Finglas and Glansnevin is my 2km radius, and there’s no water around here at all. I was fortunate enough to get a bike, just before everything closed up, and that’s set up on the turbo-trainer now. Before the 2km restriction came in, I was still getting out, and can still do a few laps of the block, but I find you can actually get a bit more work done on the turbo-trainer right now.

“And because my housemate came back from Manchester recently, we’re actually in quarantine at the moment, not going out to the shops or anything like that. It’s just as a precaution, because she was travelling, so we’re not interacting with anyone.

“I was also able to get a few free weights to use at home, so as well as getting deliveries of food, I got two of those six-packs of bottled water, the 2l bottles, and have been using them as the extra weight to put on the bench press bar. A lot of athletes have been compromising like that, using their big bin as a squat-rack, that’s been catching on to. So there’s loads of different ways you can do to get a weights session in a home. Just go around and fill a bag with heavy things.

“But at the same time I am keeping the training low-intensity. The worry is you don’t want to get sick, even a small illness, because it’s very hard to see a doctor right now, and the high intensity exercise can sometimes wear down the immunity. So I’ve been doing a lot of yoga as well, which is also keeping my head sane. My yoga teacher does some virtual classes online and that’s been great.”

This is good advice for not just the Olympic hopefuls: too much strenuous exercise can temporarily suppress the immune system, and Keane admits that holding back is not always easy. “You do feel the need to kind of push it, sometimes, but I was chatting to my coach, and I really just need one hard session, for every five easy ones. The Less Mills App is useful too, for things like spinning classes, or sharing different exercises.

“You do struggle a bit with the lack of routine, or lack of a team, because with training before I would always have someone else there. I’ve planned some training sessions for the same time as my boyfriend, even though we’re not in the same house, it just helps when you know there’s someone else exercising at the same time.”

Keane’s family home is close to the seafront in Clontarf, where she grew up, and there may be an option to move home again, temporarily, to get into the open sea with the wetsuit on, “just to feel light again”. Other Olympic hopefuls have shared some other training compromises via social media, including something simple as kicking around in the bath.

“I don’t even have a bath. I have a sort of blow-up bath, and might try that. It is a weird, weird feeling, to be out of the water for so long, and I am starting to have dreams about being in the water, or waking up in a waterbed.

“I also think it’s important to get outside for a short while each day, even if it’s just to walk around the garden. Being in the house all day would really affect my mood. And also to recognise that some mornings I wake up, feel great, all set to go, and then maybe midway through the day might feel a bit low, and that’s okay too because I think everyone is just going through a bit it that, so just let it happen.

“It’s also important, even as athletes, to just focus on being human for now, that we don’t have to train each day, and it’s important to look after yourself. It also makes you realise how much you miss it, and how lucky you are to have the sport that you do. And when we are able to swim again it will be full on, taking nothing for granted.”