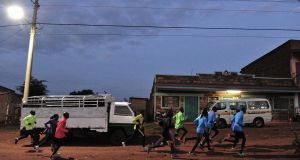 As soon as the virus hit, Elish Kelly’s thoughts turned to Iten. No corner of the planet has been left untouched by the virus and in Kenya the government responded with clinical efficiency. The results have been impressive, with fewer than 700 fatalities in a population of 50 million people.

But the shutdown has brought grave troubles of its own. Iten is the only patch of Kenya which Kelly experienced but it left a deep impression on her. The village would have remained obscure but its name has become an international byword of athletic splendour.

Running brought Kelly to Iten. After her Gaelic football career finished, she began to participate in running, which brought both enjoyment and an Irish cross-country singlet, and subsequently, persistent injury. She had heard about the running nursery in Iten and the almost fabulous story of Br Colm O’Connell, the Cork missionary who, in 1976, had a choice between a passage to California or Africa and chose the latter and then slowly proceeded to transform the locality into a kind of sanctuary for athletics. She made contact and took up an invitation to travel there for three weeks in 2018.

“In some ways it reminded me of my parents speaking when they were growing up – putting food on the table and a roof over your head. Very basic.”

She got the chance to train with the athletes and stayed with Br Colm. The visit was at once educational and magical and it returned to Kelly in a rush of memories during the national lockdown here in Ireland. She thought about the scale of economic and social disruption here and thought about Kenya’s fragile ecosystem of survival.

She began to think about the daily rigours of life there: the tiers of success based on whether people live in mud or corrugated metal or stone houses; the small vegetable patches; the tanks to capture rain water; the lack of cars and absence of electricity; the surprising ubiquity of mobile phones in dwellings that often didn’t have televisions; the power cuts; the rain storms and the transformation of dust roads into impassable muddy strips; and, of course, the running: the popularity, the depth of talent and the shining optimism.

“What I found really interesting is that there is no begrudgery there,” she says now. “But there is no fall back for Kenyans. And you have to pay to go to school there whether it is public or private. You pay to use a hospital. And the corruption is fairly rife there, just petty bribes by officials. And that makes it more difficult to make a living as well. So it is still predominantly dependent on agriculture and running is like a niche economic sector by itself. A lot of individuals will run to aim to be successful.”

It’s the group of 50 or so juvenile athletes who are hoping to translate their athletic potential into a professional career who have felt the impact of the lockdown most profoundly. Suddenly, they are not running. Suddenly, they are back in homes overcrowded with other returning members and less opportunity to make money.

“When you live on the margins, a thing like the Covid can push people over the edge in terms of survival, jobs and the whole uncertainty,” Br Colm says, speaking from his phone in Kenya. When he arrived in Iten in 1976, there was no electricity, running water, no telephones or post office. Progress has been slow and over the decades he thought he had witnessed everything that nature could throw at the region. But this is different.

“And Kenya has had everything: catastrophic rains with landslides,” he says. “Locust invasions. Drought. Trouble can come in battalions. Schools are closed and Kenya has no plans to reopen in school until January. So most of our athletes are at home. You are not allowed to bring them together. So we are trying to help them and their families a little bit through staying in touch. But it is a worrying time.”

Of the 50 juvenile athletes who were in camp, about 10 might go on to enjoy professional running careers. The major concern is that the interruption might lead to the loss of several, particularly the female runners in the camp.

“Many of our girls come from needy families and we are afraid that some with real athletic potential may get lost along they way. In Kenya, girls can be married off early. We have quite an amount of teenage pregnancies which have risen in the lockdown. We are trying to keep in touch and give them hope.”

Kelly’s response was to embark on a 15-hour fundraising cycle which she completed on August 15th. She set up a GoFundMe page and aims to continue to raise money over the winter.

“I was out on a bike one day and just decided rather than cycle around in circles doing nothing I would try and raise this. It was just to try and help Br Colm with the work he is doing with the junior athletes in his area. And Kenyans, no more than any other nationality, are very proud and aren’t looking for hand outs. It is just to try and help them get over this period of uncertainty.”

As a senior researcher with the ESRI, she has been responsible for several key reports into sports behavioural patterns, including a major study on the GAA which was released last year. One thing that struck her on her visit was the sheer vastness of Kenya. When she looked at the map, Lake Victoria appears to be relatively close to Iten. In fact, Br Colm told her, you could fit Ireland into the lake. The scale of the country magnified Iten’s reputation. Before the lockdown, the place had begun to fill with athletes preparing for the Tokyo Olympics. Then, they were gone.

“I think athletes in Kenya know the sport is going to change but they don’t know how because of the uncertainty around the virus,” Kelly says. “It is one thing a vaccine being produced in 2021 but when will it reach the ground in Kenya? Who knows? And it will probably come down to money in terms of who gets access to it. And these individuals have no social income or welfare. They really are struggling. And this has affected every corner of society but it is all relative.”

In the months before the London Olympics in 2012, Eamonn Coghlan visited Iten for a documentary about Br O’Connell’s staggering influence. What began as a strictly extra-curricular pastime to help him get to know the students he was teaching gradually evolved into one of the most extraordinary running nurseries anywhere, with 30 world championship medals at all grades and five Olympic golds, including David Rudisha’s shimmering, record-breaking race in London on a balmy night in 2012.

O’Connell watched that from his couch in the modest bungalow that has been his home: although he has coached Olympians, he has never attended the actual shows. Br Colm continues to work with elite athletes but even those who don’t quite make it to the top tier put themselves in the frame for life-changing scholarship opportunities in America and elsewhere. The sweeping change in the past decade is the now common currency of mobile phones. Local kids are more aware than ever of what is out there – and of what they don’t have. And even for the most diligent young athletes, the phone technology is proving a stunning drain on time.

“I think it has changed their outlook on life,” admits O’Connell. “They see how wealthy the world is. It has given them ambitions and how they would like their lifestyle to be. So they dream of the bigger things in the world then.”

The weeks without running have turned into months and right now Br Colm O’Connell can’t say for certain how many of his juvenile athletes will have the opportunity to fulfil their potential – or when they will be back running.

“Kenyan’s aren’t looking for a hand out or this is not about creating a culture of dependency,” says Kelly. “The problem is we don’t know how long Covid will stay. There is just an uncertainty. These young people are completely reliant on running so I’m just trying to find a way to help, as Br Colm says, to get them over the hump.”