Renowned psychologist speaks about his work and getting through lockdown 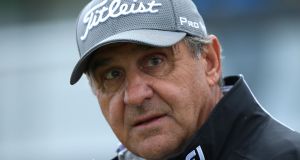 ‘Effectively, wipe your mind of everything but where you want the ball to go,’ says Bob Rotella. Photo: Andrew Redington/Getty Images

Dr Bob Rotella is prepared for almost everything. Global pandemics, life teachings and the game of golf. In fact, Rotella’s golf tips are more applicable now than ever.

For Rotella, this was ironically the best time for him to take some time off. Hunkered down in his home in Georgia, Rotella is writing his latest book, again on golf psychology. As well as staying with his wife, Darlene, his phone is hopping with calls.

“I’m busy talking to players on the phone. I think the uncertainty is the most difficult thing for the players. At least the tour is going to start back up again, and everyone can put a plan together and get ready. Everyone is excited”.

Golf is an individualistic sport, where every player is responsible for what happens to them during a game. While team sports are still not allowed to train in large groups, Rotella acknowledges the challenges that they face; however, now is the time for the players to work on themselves individually.

“What I tell them is, ‘You’re better off to be ready for whenever they tell you they’re going to start practising. You just got to make sure you’re ready’. Work on your mental game and your physical side. Do some weights, but do a lot of mental preparation, a lot of visualisation, imagining yourself playing in a game, and imagine playing great.’ A lot of athletes are getting ready for no fans, getting mentally prepared to play without a crowd noise, which will be different.

“But once it’ll start, they’ll be ready and excited. It’s just about competing again, and you’ll see the competitor come out once they’re on the field or course.”

Some of the structures golf fans are familiar with have changed. Rotella laments the fact the leading Korn Ferry Tour players at the end of the season will not be promoted to the PGA Tour, therefore denying young golfers a chance at testing themselves to be the best with the best. But sometimes when a system changes, some may find that silver lining.

“The players who are rookies on (the PGA) tour who got off to a terrible start on tour are happy because it means they’re going to get another chance to start all over again next year without losing their courage. Some people are benefiting, and some are disappointed”.

Breaks are rare in golf, so reconnecting safely with family is an obvious bonus, but also switching off for a few weeks and not thinking about the game is a luxury rarely afforded to players.

“Some players are probably going to get themselves messed up because they’re studying everything, they are getting too perfectionist. Others are going to come out of this break and say, ‘Well, this is the first time in the last 15-20 years of my life that I’ve had a three or four-month time period where I could just go work on something that I need to improve on without worrying about having a tournament the next week.’ I don’t think Dustin Johnson’s going to mess up his game, for example, he’s been pretty relaxed. He’s just going to go play”.

Rotella is keen on what he wants everyone to work on. Number one, pick a fairly small target that’s the only thing your eyes and your mind look at or think about. That’s where you want the ball to go. Number two don’t walk up to the ball until you’re committed. This is a shot. This is a club. This is where the ball’s going to go. Then go for it. Get up over the ball and see the target and then let it go.

Our conversation turns and twists around several subjects and, like any sports-mad fan, Rotella has also watched the infamous Chicago Bulls docuseries, The Last Dance. Rotella is 71 and has seen how leadership, winning and how sport has changed throughout his lifetime.

“I think we have made winning so important that we gave up on all the rules. In America, our sports are connected to our high schools and colleges. It was justified on the basis that it was part of the educational system, and we were using sports to build character and treat values that the culture believed in. Most teams have next to no rules nowadays because they don’t want ever to have to suspend a so-called star player. We’ve made winning so important.”

One leader Rotella has worked closely with and continues to watch grow and flourish is Pádraig Harrington. Harrington and Rotella have an incredibly close bond. Rotella believes Harrington will exemplify leadership throughout his tenure as Ryder Cup captain.

“He has a wonderful, upbeat demeanour about himself. He’ll be a great Ryder Cup captain. He’ll deal with whatever they have to deal with. Pádraig, as you know, he’s a very driven player, but he’s also a very other-oriented person. He likes and cares about people. He’ll be great as a captain. All the players on the team will enjoy having him as a captain”.

“They are different for everyone because everybody has certain process goals. They have to identify, ‘Which ones do I need to pay attention to because they don’t come so easy?’. Generally, process goals would be doing mental and physical routine on every shot. Also, being in a great state of mind every second on the golf course. Stay in the present all the time until you’re out of holes and treat the holes with the same equal level of importance”.

But what if you’re an ordinary layperson reading this who possesses little in the way of sporting ability? Maybe you’re worried about your business, life or sport from the outside.

“Number one, you have to keep your passion for your business or your sport, and you have to be ready when it all opens up. You have to be optimistic that there’s going to be a silver lining to this and you got to be able to adjust. Things are going to be different, and you just got to respond to them better than everybody else. Everyone’s always looking for an edge, and you got to find your edge. Some things are going to change, and the people who adjust the quickest and enjoy the challenge are going to do the best”.

Routine, process, positive mindset, baby steps, and avoid results-driven practices. The formula applies to any life scenario and just like these crazy times; we can all only play the hole that’s in front of us, never looking back and never looking forward. Hole-by-hole. Game-by-game. Day-by-day.