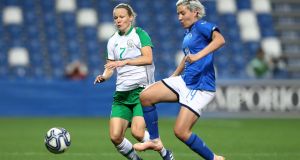 She’s faced enough challenges during a football career that has taken her from her home patch of Balbriggan to the United States, Iceland, Norway and, since 2016, Germany, to the point where Diane Caldwell feels like she can deal with anything life throws at her. But while the news of Colin Bell’s departure from the Republic of Ireland job came as a bolt from the blue for the squad, for Caldwell it was an especially bitter blow.

Bell had, after all, been hugely supportive when she was at her lowest ebb, rebuilding her confidence and giving her the chance to fulfil her dream of playing professionally in the top flight of the Bundesliga.

When he phoned her back in June, then, to let her know he was moving on, she was, she says, “crushed”.

“It was heart-breaking when he told me he was going to Huddersfield. I could not believe it. I just saw how much he was in to the Irish job, we were all like family. I thought there’s no way he’ll walk out on us, no way. But then it happened.

“But it was a financial opportunity he probably couldn’t turn down, he was never going to get the same offer in the women’s game, the FAI just couldn’t meet his needs. I would like to think if I was in that position I would be loyal and stay to finish the job, but when money’s involved, maybe you respond differently? But it was tough to take. It’s still raw.”

With the team beginning their Euro 2021 qualifying campaign next Tuesday in Tallaght against Montenegro, Bell’s successor has still to be appointed, Tom O’Connor in the caretaker role. For centre-back Caldwell, who has 70 caps to her name, that next appointment is critical because she believes, despite being third seeds in their group behind Germany and Ukraine, ahead of Greece and Montenegro, the team is capable of qualifying for Euro 2021.

“We’ll just trust that the FAI continue to search for someone of Colin’s calibre because that’s what we have to have, we can’t go backwards now. He brought us to a new level and we need someone who will build on that. For me, we have to choose someone from abroad – and that’s not anything against the Irish coaching setup. But I like fresh people coming in, people who will push for change, not settling for the way things are, which is easy to do if you’re already in an organisation. Colin came in from the outside, he was unbiased, brought a fresh energy and a new perspective, a high level of professionalism. And that’s what we need again.”

It was Bell who signed Caldwell in 2016 for SC Sand, a club based in the German town of Willstätt, and she’s been there since. It’s the most recent leg of a journey that began when she was a kid playing in Balbriggan before joining Raheny United. She made her senior Irish debut when she was just 17 and in the same year found herself on a plane to New York after being offered a football scholarship by Hofstra University. “I loved my time there, it was just a whole new world, football was everything, it was like a professional environment.”

She completed her degree in physical education, but to stay on to do her masters she signed up for the college hockey team, a sport she had played when was a pupil at Mount Temple Comprehensive. “I was called up for Leinster trials once, but I didn’t go – it was football for me.”  She carried on playing football, though, with the not so snappily titled Hudson Valley Quickstrike Lady Blues and Albany Alleycats, but by then her ambition was to play professionally in Europe – and with the assistance of an agent she found herself in the northern Icelandic town of Akureyri.

“It was a small whaling coastal town, so it was some change from New York,” she laughs. “We were the only club up north so we had to travel five hours by bus for every game. But it was an amazing landscape, really barren, no trees because of deforestation, lots of volcanic activity, geysers, stunning. And a very professional club too, I was well looked after. I was there for the second half of 2011 and then got an offer from Avaldsnes in Norway, which I grabbed with both hands.”

As a lover of the outdoors, with a passion for snowboarding and mountain-biking, Norway stole her heart too, but it was, she says, a challenging time. “Noel King had dropped me from the Irish squad because of my decision not to go to the World Student Games, it was heart-breaking because all of my moves were about being the best I could be for Ireland. It was like my throat had been cut. I was out for around two years, it felt like an eternity.”

And after two successful seasons with Avaldsnes, whose wealthy owner bankrolled their rise to the top division and qualification for the Champions League, the experience turned sour for Caldwell with the arrival of Tom Nordlie as manager. “He just never gave me a chance. I wasn’t playing. I started to question why I was putting all this effort in and sacrificing so much, not even seeing my family. I fought hard, but it just wasn’t to be. I needed a fresh start, I needed to get out of there, I didn’t want to be hating myself as a person and a player.”

It was struggling FC Koln who provided an escape, and while they were subsequently relegated, SC Sand snapped her up. “Things move so fast in football, in life in general, you don’t look back. But I remember sitting out in my garden one day and thinking it was only months before that I was in that terrible mindset, confidence shattered, a really bad spell in my life, and I just started getting emotional because I was thinking, ‘look where I am now?’ A starting player in a Bundesliga team. A club that felt like home, everything I ever wanted. And it was Colin who rejuvenated me. He saw the potential in me. My game just sky-rocketed. Because of him. Because of the belief he put back in me.”

The irony, then, Bell leaves SC Sand for . . . Ireland. “My club-mates were distraught, but I, at least, was still going to have him as my national coach. But we’ve done well. This is our sixth season in the Bundesliga, we’ve got to two cup finals, unprecedented for a club of our size. Financially we would be the smallest club in the league, but we punch way above our weight – we’re not big names, we’re not big talents, but we work damn hard.”

For the 30-year-old, who, with one eye on the future, completed her Uefa B coaching licence during the summer, the chief ambition is still to be part of an Irish team that qualifies for a major tournament. That, she says, is what she wants her legacy to be, not her role in the stand the squad took two and a bit years ago against the FAI over their grim treatment.

“And I’m proud of that, proud of us all. We were told we would never play for Ireland again if we carried out the strike. But we stood together, and ultimately we got what we wanted and we’re benefitting from it now. And that stand will leave an amazing legacy for the girls coming through. But for me, the ultimate legacy would be getting Ireland to the European Championships or the World Cup, to set those standards. That, more than anything, is what I want to leave behind.”