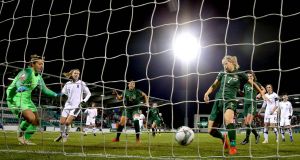 It seems like a lifetime and a half ago when Ireland took on Greece in Tallaght in their Euro 2021 qualifying game, before heading to Montenegro for another group fixture six days later. Come the end of the two games, from which they took maximum points, Vera Pauw’s side found themselves top of the table.

Who knows when they’ll get to resume their campaign, but when they do they’ll be in the best position any Irish side has ever been to qualify for a major tournament.

The mighty Germany, a point adrift but with a game in hand, remain firm favourites to win the group, Ireland still having to play them home and away, but with three qualifying spots up for grabs for the best runners-up, there’s reason to be hopeful. Failing that, the playoffs provide another route to the finals in England which have been moved to 2022.

The only blip in the campaign so far came last November when Greece scored that gut-wrenching injury time equaliser in Athens, but Ireland have taken maximum points from their other four games, beating Montenegro, Ukraine and the Greeks at home, and Montenegro again in that last outing which was played behind closed doors.

Neither of those March victories, against weaker opposition that had been trounced by the Germans, was pretty, but it’s a case of never mind the quality, count the points. The failure in the past to beat similar opposition always proved costly for Ireland, but they now have the look of a team that knows how to win even when the performance isn’t up to par.

The experienced central defensive pairing of Diane Caldwell and Louise Quinn has been a major factor in Ireland’s progress, just three goals getting past them in the five games so far. But they had a significant impact at the other end of the pitch too in the March games, Caldwell scoring critical goals in both.

Carbon copy goals they were too, Quinn heading back a Katie McCabe free in to Caldwell’s path for her to score what proved to be the only goal of the game against Greece on her 75th appearance for her country. And it was deja vu against Montenegro when the same pair set up Caldwell to head home Ireland’s opener, McCabe and Denise O’Sullivan adding two more goals in the final 10 minutes.

The Balbriggan native, who plays her club football with SC Sand in Germany, is usually hailed for her defensive work, and for her form at the back through the campaign so far she deserves saluting again. But add in two crucial goals and, well, you earn yourself the sportswoman of the month for March award. With any luck, we’ll see Caldwell and her Irish team-mates back in action soon.

December: Fionnuala McCormack (Athletics). In her record 16th appearance at the European Cross Country Championships, and a record 38th senior appearance for Ireland, the Wicklow woman just missed out on a medal in the individual race, finishing two seconds behind the bronze winner, but led the team to silver, Aoibhe Richardson and Ciara Mageean’s top 20 finishes sealing the success.

January: Katie-George Dunlevy and Eve McCrystal (Cycling). While most of their success to date had come on the road, the pair having won five gold medals at Para-cycling Road World Championships, they transferred that pedigree in to their performances at the Track World Championships in Canada in January, winning silver in the Tandem Pursuit and breaking their own national record en route to that medal.

February: Rachael Blackmore (Horse racing). It’s been another outstanding season for the Tipperary jockey who earned a place on our roll of honour even before she rode Honeysuckle to victory at Cheltenham last month. By then she’d sealed the award for February, the highlight of which came at Leopardstown when she completed a Grade One double on the opening day of the festival, including the big one on Honeysuckle in the Irish Champion Hurdle.