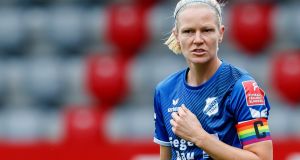 Diane Caldwell: “I might have been playing there [England] instead of Germany but Germany was always the dominant league so it was a dream of mine to go and play there.” Photograph: Roland Krivec/DeFodi Images via Getty Images

With a few days to go before group leaders Ireland take on qualification favourites Germany in Essen, Diane Caldwell’s mood is decidedly cheery, her message not so much.

Just turned 32, the SC Sand defender is especially well-placed to assess the scale of the challenge to be faced on Saturday. About her most encouraging take on it is that the eight-times European champions are currently in transition.

But oh, what a transition it seems to be.

If the Dubliner was deterred herself by these sorts of things, of course, she might never have had half the high-level career she has enjoyed, a fraction of the 76 senior caps, or a hint of the adventure.

Having left Ireland for a scholarship in the US that she managed to extend to post-graduate level by playing hockey while kicking ball on the side for the magnificently-titled Hudson Valley Quickstrike Lady Blues then Albany’s Alleycats, she worked her way to the Bundesliga via a club in a whaling village in Iceland then a stint in Norway that turned decidedly sour.

She’s been in international exile for periods too with Noel King having left her out in the cold for two years because, it seems, she declined to go to a World Student Games.

Right now, though, she is right at the very heart of things under current Republic of Ireland coach Vera Pauw, having played every minute of the Dutch woman’s four European qualifiers in charge. Ahead of the clash with Germany, Caldwell is providing intelligence off the pitch as well as on.

The likes of Dzsenifer Marozsan, Alexandra Popp and Melanie Leupolz will be remembered from the game in Tallaght five years ago when Ireland led the then European champions but lost the game in a frantic final few minutes thanks to a wind-assisted goal. They [the Germans] had a very off day, observes Caldwell ( who came on late herself that day) rather casually.

Under current coach, Martina Voss-Tecklenburg, she suggests Germany have a new, more polished playing style and an emerging generation of fresh talent.

“I think the biggest name that stands out for me,” says Caldwell when asked to pick just one of the more recent arrivals, “is Lena Oberdorf. She’s a very young player, aged just 18, and new into the squad (13 caps and two goals).

“She played with Essen when she first came on the scene and really caught my eye. At the time she was playing like a No 10 but since she got called to the German national team she has played numerous different positions, mainly a six or centre back, and got signed by Wolfsburg, the best team in Germany. She’s massive talent, one definitely to look out for.”

The Bundesliga is, Caldwell says, the league that inspired her growing up and the one she harboured ambitions to play in. But she notes that a shift is now underway within the women’s game with England’s Super League already rivaling Europe’s traditional powerhouse and destined, it seems, to eclipse it even if, contrary to the various assertions made in the recent media club season previews, it is not quite there yet.

“Definitely, there’s been a shift,” she says, “but more so because of the marketing campaign. The FA, and the Women’s League in England are doing an amazing job marketing the league as the best in the world, branding it, and so it becomes a place where everyone wants to play.

“And of course you’ve got the recognisable badges on the jerseys; you’ve grown up supporting these clubs or watching them as a child; most of the teams are quite closely affiliated with the men’s clubs. In Germany, a lot of clubs are independent in terms of their finances and structures.

“In terms of the level itself,” she maintains, however, “I wouldn’t say that level is better than the Bundesliga. But it’s the appeal of the league that will ultimately make it the best, I think, in time.

“You see now with the transfers that have happened in this last window. Wolfsburg’s best player, Pernille Harder, she’s gone now to Chelsea. Leupolz who was Bayern Munich captain has gone to Chelsea. And now you have the influx of all the American players on a temporary basis during the coronavirus crisis. So the appeal is there because of the support of the FA.”

Had there been a fraction of the current resources available back in 2006, perhaps Caldwell might not have taken such a circuitous route to one of the continent’s top leagues. But, she says, there are no regrets.

“Yeah, of course, I might have been playing there [England] instead of Germany but Germany was always the dominant league so it was a dream of mine to go and play there.

“And you never know what might happen,” she adds smiling. “I hope I can still keep playing for a few more years so maybe I’ll still end up in England.”