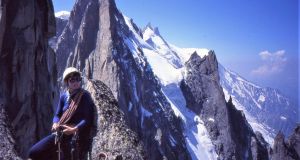 Clare Sheridan climbing in Chamonix in the French Alps

It wasn’t a man who firmly told Clare Sheridan that “girls don’t climb” but actually a fellow female member of the UCD Mountaineering Club.

This was early-1970s Ireland, where you’d still struggle to slip a Rizla paper between the three pillars of Church, School and State.

A convent education had already impressed upon Clare and her sister Bairbre that modesty and chastity were far more desirable traits in ‘young ladies’ than their already burgeoning taste for adventure.

A priest arrived up to the club’s promotional stand during Freshers’ Week to berate them for putting their ‘God-given bodies’ in harm’s way.

Others had no problem with women hill-walking but rock-climbing? That was a step too risky even for some of the sisterhood.

Yet once Sheridan discovered Dalkey Quarry the shackles of church and tradition fell away, instantly replaced by a climbing harness.

A Honda 50 was hastily purchased to hasten her trips and into McDonagh’s pub afterwards, the local hotbed for rock climbers where Joss Lynam and Paddy O’Leary, of the newly opened National Adventure Centre in Tiglin, were also regulars during this embryonic stage of Irish adventuring.

“It [rock climbing] was the gateway to real mountaineering and sounded not just fun but wildly exciting, a whole new way of using our bodies, bodies that we still knew little about,” Sheridan recalls in her absorbing new memoir Uncoiling the Ropes.

Her marvellously pioneering life once included a stint of being dropped daily by helicopter to abseil down the cliff faces of the Canadian Rockies, laying cables for an oil prospecting company.

Today the 68-year-old retired school teacher from Bray is still immersed in alpine climbing and her passion for scaling heights without using ‘fixed bolts’ is still as singular and luminous as ever.

There were some notable women climbers, like Betty Healy, in Ireland in the 1950s and ’60s but Trina Cleary, who had qualified in Scotland, was the only trained female leader – those who create routes and help their partners up rock faces – Sheridan encountered when she started.

By the time she had accumulated enough difficult climbs to apply to become the first female member of Dublin’s famous Spillikin Club – whose Alpine exploits were the stuff of her dreams – they had disbanded.

Back then climbs were graded into seven official categories and ‘very severe’ was fifth highest.

Once Sheridan had passed that milestone in 1972, by leading a VS route called ‘Nightmare’ beside Spillikin Ridge in Glendalough, there was no turning back.

Greater bluffs, peaks and horizons were soon conquered, most in the company of her future husband Calvin Torrans, a Belfast climber who had captured her heart even before producing the gift of an ice hammer for her 23rd birthday.

Together, North and South, they plotted and recorded many famous ‘first routes’, founded the Dal Riada club in 1976 and were part of historic Irish expeditions to climbing Meccas like Chamonix in the French Alps, Kishtwar in the Himalayas and the Peruvian Andes, where their attempt to summit Artesonraju (6,025m) in 1980 ended with the tragic loss of team-mate Tom Hand.

Sheridan discovered “breaking out of a chrysalis to inhabit a better, braver, more powerful version of yourself,” and says “testing your limits and surpassing your known self is at the heart of climbing.”

Female athletes of many persuasion have since known that euphoria but in Irish sport, not just climbing, Sheridan was a trailblazer.

“When Bairbre and Sheila [Willis] made our first tentative moves up steep rock in 1971 no woman had yet got to the top of Everest and women were not permitted to run in marathons.

“When it came to strenuous exercise, there were dire warnings about the possible effects on the female body,” only adding to her delight at witnessing the inaugural Dublin Women’s Mini-Marathon in 1983.

“It’s really only in the past generation that women have felt the freedom to do something physically that is purely for themselves, to feel they had permission to pursue and commit to sport,” she feels. “There were always Olympic athletes but, when I started out, no one knew them or saw them.”

Having three children never deterred her, which she partly attributes to having a similarly obsessed husband: “We simply brought the children with us and didn’t have to make all those difficult decisions. We supported each other.”

As we speak she’s not long back from a training session at Awesome Walls in Finglas where she sees many women now sport-climbing, the fixed-bolt discipline that’s about to make its Olympic debut.

“France has the biggest percentage of alpine guides per population in the world but the last time I checked only two per cent of them were female.

“Alpinism is still stacked against mothers, and not the only sport like that,” she reckons. “If nothing else because the practical issues of running a house and caring for children still largely falls to women, all the ‘under the radar’ stuff that is so exhausting.

“If it’s a sport where you’ve got to extricate yourself from the family for very long periods, inevitably the woman steps back.”

Danger, she accedes, is another deterrent.

“All the world’s wars are largely fought through the bodies of young men. It seems to be inbuilt in women to take things more cautiously, we are way more risk averse. People might say that I’m not, but I judge everything very carefully.

“It’s been fascinating for me to see is that, when you take out the time element, the hardship and the so-called ‘risk’, women love the basic movement and athletic feel of sports climbing in gyms. They progress really quickly at it.”

No Irishwoman conquered Everest until Dr Clare O’Leary in 2004.

Sheridan contemplated it “but not once the children were born. Any of those trips are three to four months away from home and I just wasn’t interested in that.”

She is infuriated, though, by the double-standards sometimes applied to women who scale such heights.

When Alison Hargreaves, a renowned solo climber, fell to her death off K2 in 1995, UK columnists dissected her ‘selfishness’ and ‘Unfit Mother’ featured in headlines.

“She was judged completely differently than men or fathers in her situation. Her subsequent biography was heart-breaking. Alison was clearly torn. She wanted to be there but also felt it was the only way to earn a living for herself and her children.

“For far too long the choice of being selfish like that has only been open to men,” observes the only Irish woman to date to receive the Joss Lynam medal (in 2014) for services to Irish mountaineering.

“The phrase that’s popular now – ‘if you can’t see it you can’t be it’ – that’s still very much the case in terms of traditional mountaineering and climbing, which is what Calvin and I mostly do.

“You see all these great films and documentaries now but always about men.

“There’s still very little exposure of the small number of females who engage in it internationally, and that has to have a psychological effect. The fact that women are still relatively invisible? That is surely a barrier.”

*Uncoiling the Ropes by Clare Sheridan (Mweelrea Press, €18.00) is available, online, from the Great Outdoors and Mountaineering Ireland and in selected bookshops.