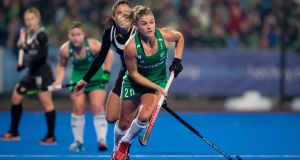 Ireland’s Chloe Watkins in action against Canada in the second leg of the Women’s FIH Olympic Hockey Qualifier at Donnybrook. Photograph: Morgan Treacy/Inpho

Having made her senior debut for Ireland as an 18-year-old a decade ago, winning her 200th cap in the 2018 World Cup final, free time had become something of a rarity for Chloe Watkins, a relentless schedule leaving little space for anything other than hockey, studies and work.

Now, she has more free time than she knows what to do with, and it’s beginning to feel a lot more like a curse than a pleasure.

“I’m running up the walls at this stage, I’m sure everyone is the same. I’m trying to find random activities to keep me occupied, anything to stop us from killing each other in the house,” she laughs. “I’ve done three jigsaws that were a thousand pieces. I don’t think I’ve done a jigsaw since I was around 10. They’re fine until you’re not getting anywhere, then you want to throw them across the room.”

Need it be said, four months from the day Ireland were due to open their Olympic campaign against South Africa in Tokyo, Watkins hadn’t envisaged whiling away the hours tackling jigsaws. Instead, she was due to be with the squad in Malaysia this month as part of its Olympic preparations, and when that was cancelled, a trip to South Africa was pencilled in instead. That too, of course, fell by the wayside.

Since then, Watkins has been trying to keep things in perspective, knowing there were bigger issues to be concerned about, but all the while there was that dread that the Olympics would be cancelled, rather than just postponed.

There was some irony in Canada being the first nation to officially withdraw from the Games, the Canadians having been the side Ireland beat so dramatically in that shootout in Donnybrook last November to become the first Irish women’s team to qualify for the Olympics. And Watkins played no small part in the achievement, brilliantly converting her effort in the shootout. All of that, though, now seems like a lifetime ago.

“It really does,” she says. “This is nothing you could have prepared for or foreseen at all, it’s probably a once in a lifetime thing. I don’t think anyone knows how to be feeling right now.”

“And through it all I felt bad for even having concerns about the Olympics because this is a global pandemic, there are far more important priorities than the Olympics – and we do understand that.”

“But of course, we all worried about a cancellation, that was the biggest fear. Things have gone so crazy, it’s hard to rule out anything. These are unprecedented times, you really don’t know what to expect. I didn’t envy the decision-makers at all – on the one hand you have athletes who have worked towards this all their lives, on the other you have a pandemic that is so serious, and that had to be their primary concern.”

It was with a “mix of emotions”, then, that she greeted Tuesday’s announcement that the Games had been postponed until next year.

“It is definitely the correct decision, people’s health is the only thing that matters now, so there’s a far bigger picture to think of. But, just from our own point of view, it’s hard to take because we have planned our lives around this for so long and taken time out of our careers and studies – and some of the players are on career breaks. Hopefully the support that we’ve received from employers and sponsors will continue, that they can extend it for another year.

“The biggest relief is that a cancellation has been ruled out, and hopefully that has been firmly taken off the table. And getting a decision now means we can refocus, our coaches and management can start working on a new programme with next year in mind.

“But it is difficult to get your head around when this summer had been the only thing in our minds, getting there had been our sole purpose the last few years. It’s a big upheaval for all of us, and for every athlete in the same position.”

Until Tuesday’s announcement the squad had all been working individually on their fitness, a surreal experience for the players so accustomed to being part of a group.

“And we do enjoy each other’s company, we’re used to being around each other 24/7, so we’ve all really been missing each other. We’ve been sharing videos of ourselves in our WhatsApp group, just to say hi to everyone and stay in touch. And that’s been important from a motivational point of view as well, it’s difficult to go out and train by yourself when you’re so used to a team environment.”

“But we’ve just been trying to keep things ticking over, getting out for runs when we can, working on the remote gym programmes that we were given. We’ve been having Skype meetings with our coaches, some separate ones for the defenders, midfielders and forwards, just trying to stay on top of things from a tactical point of view, making sure we’re still progressing. It’s all we can do right now.”

The Olympic postponement, though, changes everything, the players now awaiting instructions from coach Sean Dancer and his team on where they go from here.

For Watkins, a trainee accountant from Dublin, there is at least some comfort in getting that Olympic decision, rather than being left in limbo for another few weeks.

“It definitely has taken some of the stress off the situation, we know where we stand now. And like everyone, we’ll just wait to see where this goes. All that matters is that people are okay, stay safe and we get control of it. We’ll get back to our hockey some day, but for now, it’s not important in the scheme of things.”