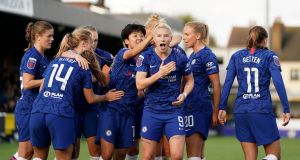 Chelsea have been awarded the 2019-20 Women’s Super League title after the final table was determined on a points-per-game (PPG) basis.

Emma Hayes’ side sat second in the WSL table when the season was suspended in March, but leapfrog leaders Manchester City having played one game less.

City earned 40 points from 16 games (2.5 PPG), while Chelsea had 39 points from 15 games (2.6 PPG). Both teams have been awarded places in the Women’s Champions League for next season.

The statement also confirmed that Liverpool, who won the title in 2013 and 2014, have been relegated to the second division. They will be replaced by Aston Villa, who have been confirmed as winners of the Women’s Championship.

In an official statement, Liverpool said they were “disappointed by today’s decision on how the WSL season has been concluded. The focus of our women’s team and staff since the beginning of the crisis was to be ready to return when it was safe.

“We believe we would have been able to meet all operational requirements but a return to play was deemed impractical,” the statement added. “As proud founder members of the WSL, our fans greatly value our position within the league and we hoped for the opportunity to secure our status on the pitch.”

“The FA Board has reached a majority decision to decide the 2019-20 Women’s Super League and Women’s Championship on a basic points-per-game basis, with promotion and relegation determined on sporting merit,” said an FA statement.

Kelly Simmons, the FA’s director of women’s football, said: “I would like to thank the clubs for their ongoing collaboration and support throughout this period. They have played a crucial role in helping to shape the decision-making process, with the welfare of the players and clubs first and foremost.”

I would also like to congratulate the players, coaches and staff of Chelsea and Aston Villa. Although the 2019-20 season has been prematurely curtailed, their success is well deserved, with the outcome based on sporting merit.”

The WSL and Championship seasons were ended on May 25th due to the coronavirus pandemic. The FA are yet to make a final decision on the Women’s FA Cup, which is paused at the quarter-final stage.