Aoife Murray rightly remembered as one of camogie’s greats 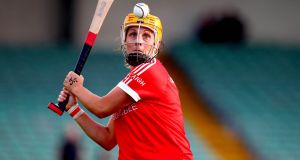 Aoife Murray: over 18 season’s as Cork senior goalkeeper she embraced her position and raised it to an incredible standard while winning every honour in the game. Photograph: Ryan Byrne/Inpho

For someone so prominent and such a stalwart in Cork camogie, Aoife Murray hung up her boots incredibly quietly. Sure, goalkeepers tend to be a hero and a villain within 0.5 of a second, but there is no doubt Murray was a hero the majority of the time.

Granted, the airwaves, front pages and headlines are rightly dedicated to the ongoing pandemic around us, and granted, us sports columnists are seeking stories in an empty pit that seems never-ending. But specific stories, like Murray’s tenure as number one in Cork and arguably camogie, are absolutely timeless.

It is safe to say Murray revolutionised the goalkeeper’s role in camogie. She made the ridiculous look sublime and the outrageous look regular while also commanding her team-mates on and off the pitch. For a goalkeeper, there is no hiding place.

Murray embraced her position and raised it to an incredible standard from when she first started, no doubt that’s a higher testament to her than any words written in a paper or said about her on the airwaves.

Watching her produce acrobatic saves, the way she instructed her team, her pinpoint accurate puck-outs and how she evolved the role, the 18 seasons spent wearing Cork’s No 1 one jersey, as well as four extra years in and out of the starting 15, absolutely flew by.

Amazingly, in the light of all those phenomenal achievements, Aoife used to commute regularly from her home in Dublin to training throughout her time on the senior panel.

But by far the highlight of Murray’s career isn’t the fact she won all of those All-Irelands or the fact that she has been recognised as one of the top, if not the top, goalkeeper camogie has seen, it was captaining Cork to All-Ireland glory in 2018 alongside three of her brothers, Paudie as manager, Kevin (coach and former All-Ireland winner) and Damien (logistics) with her parents and other members of her family watching on.

Murray openly admitted to doing it for her parents and hoping that they were proud, given how many years of dedication they spent going to training and matches at a time when only family and friends were expected in the stand.

Off the pitch, Murray was also a tremendous role model and advocate for women in sports. The interview that remains memorable was when she appeared in Dara Ó Cinnéide’s series on GAA, camogie and ladies football, GAA Eile.

Murray reflected on a time when the senior camogie team were shifted from a pitch to facilitate under-12 boys training. Due to the current situation that the three sports are three separate entities and under three individual banners, the camogie team had to vacate the pitch for the young boys.

Her campaigning for all senior teams to be seen as equal and her plea for equal rights for women’s teams hasn’t gone unnoticed. This year she was appointed to the WGPA executive to further the efforts to make the playing experience enjoyable for all, irrespective of gender.

There’s no doubt there is a huge void for Cork to fill given Murray’s retirement, and while the average age of the Rebel camogie squad is 22, with All-Star additions Gemma O’Connor, Julia White, Pamela Mackey and Briege Corkery ready to enter the fold, it is now up to the young guns to step up.

So, despite not being able to go out on top or after an All-Ireland win, Murray puts her hurley down and hangs up her boots. With her head raised proudly and a smile on her face, she can look back fondly on a career that smashed glass ceilings.

From continued success with Cork as a minor into the 1990s, transitioning her role as a goalkeeper as the game evolved around her, to making sure her parents were the proudest people among the 21,453 attendance in Croke Park in 2018 – when time allows Murray to reflect and ponder life’s next move, one thing is for sure.

As a role model, player and campaigner, Murray has left her mark for the future generation and has ensured better standards all round for the camogie players of the future.

And that is why she is and will be considered one of the greats.