Amber Barrett insists Ireland must be ‘wise and smart’ in Montenegro 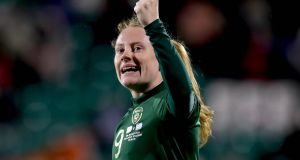 Ireland’s Amber Barrett celebrates after the game against Greece in Tallaght on Thursday. Photograph: Ryan Byrne/Inpho

Amber Barrett insists the Republic of Ireland women’s soccer team must apply a “wise and smart” approach to their task in Montenegro on Wednesday to avoid a cataclysmic slip-up ino their 2021 European Championship quest.

On Wednesday morning it was announced that the match will go ahead as planned but will be behind closed doors due to concerns over the spread of coronavirus.

Victory over Montenegro, who are now down in 94th in the Fifa rankings, would compete a 10-point haul from the two lower-ranked nations in the campaign.

Unlike previous qualification quests, however, it was the slaying of second seeds Ukraine which laid the foundation towards Ireland’s trek towards reaching next year’s final in England.

While there is still plenty of work required to create history by breaking the mould and qualifying for a major tournament, three points accrued in the sleepy coastal village of Petrovac would clear the route.

Vera Pauw, the Dutch veteran who took over just before that defining 3-2 victory over the Ukrainians, does not expect the second seeds to record the necessary clean sweep of wins in their final five matches to usurp Ireland for second. One of those games is the rematch on June 5th, where avoiding victory could confirm second spot for Ireland.

That’s unlikely to be enough to claim one of the three places on offer at the tournament for the runners-up, according to Pauw, but at least a second playoff in their history in November would be on the agenda.

“Our target from this double-header was six points, and we’ve got the quality to beat Montenegro,” said Barrett from Co Donegal.

“We can look at the group table after the match. Whether it’s 10-0 or 1-0, all that matters today is getting another three points,” said the forward, operating in the Bundesliga for FC Koln since the start of the season.

“We beat Montenegro at Tallaght, but they gave us a good game. We know they’ll be once again dogged. Of course they’ll sit off to allow us have possession, but how we use the ball is the key. It’s all about being smart with our passes and remaining patient.”

Barrett, who scored in the last away qualifier in Greece, could replace Rianna Jarrett as Ireland’s main striker on the basis of squad rotation. There is also a vacancy left by Heather Payne’s hamstring injury which she suffered during Thursday’s 1-0 win over Greece.

Stephanie Roche or Clare Shine could deputise as Ireland seek to at least temporarily occupy top spot in Group I.