Ada Hegerberg - injured, separated from her husband, but still focused 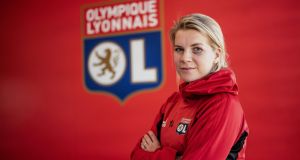 Ada Hegerberg is determined that the health crisis should not interrupt the fragile development of women’s football. File photograph: Getty Images

Ada Hegerberg felt something happen to her left knee while training, but she didn’t know what it was. “It just snapped,” the striker said of the injury sustained before Lyon were due to play Stade de Reims on January 26th. “It gave this click sound. In a situation you’ve found yourself in 10 times, 10,000 times before. I felt my body shaking. It was a signal. But then I was back on my feet and I didn’t have any pain.”

With the muscles around her knee tense, making it hard for the physio and doctor to identify the issue, it was two days before the worst was confirmed via an MRI scan.

When the Norwegian was told she had ruptured her anterior cruciate ligament she was left “not knowing where to head” – but she knew her season was over. “It’s a very, very strange feeling. I consider myself to be a very privileged woman and with a wider perspective it’s not the end of the world, but when you’re a footballer and an athlete at a high level it kind of feels like you’re at rock bottom.”

The 2018 women’s Ballon d’Or winner is not used to being on the sidelines. “Touch wood I’ve been quite lucky.” Up until January, she had a remarkably consistent and injury-free career which allowed her to reach 282 goals in 271 appearances, including a record 53 Champions League goals. Perhaps the most impressive thing about those statistics is she is only 24 years old.

Hegerberg has had the sort of twisted fortune, not that she would express it that way, of having the injury in the year that football has been halted by the coronavirus pandemic, but she too has been affected. Rehab is different. More significantly she is separated from her family in Norway, who provided her and her sister Andrine, who plays for Roma, with an environment that enabled them to thrive as players from an early age. She is also, having missed the narrow window to cross the border, separated from her husband, the Lech Poznan defender Thomas Rogne, who is in lockdown in Poland.

Despite that, she is surprisingly upbeat. “I’m doing fine,” she says cheerfully from her home in Lyon. “I’m not complaining. The circumstances are so strange at the moment, I’m just trying to keep home, and I’m lucky to have everything in place from my rehab.

“I’m in a period where you have a lot of feelings in certain moments.” She says it is crucial to contextualise those moments, to recognise them as “part of the process”, adding: “Sometimes you need to lower expectations and be a bit more gentle to yourself through those difficult periods in order to conquer them.”

Hegerberg adds that it is hard to talk about football because “society as a whole needs to get in place before football gets in place again”. Yet she is determined to help make sure that women’s football is a key part of discussions when it comes to the sport’s coronavirus recovery.

“But it’s just very important to keep women’s football in the discussions at all times. There has been great development in the last years, it’s had a good rhythm, and it’s very important that we don’t take two steps back again after a crisis like this because we’re not the first priority. We just have to keep the voice strong and not lose our position. It’s such a strange situation to be in so it’s very hard to say where it will go but we need to push for the same evolution that we’ve seen in recent years.”

This is not the first time the Lyon forward has used her platform to push the game forward, and it won’t be the last. She has used her high profile to drive change, most notably in stepping back from Norway’s national team over a perceived lack of support and investment in girls’ and women’s football, and she has a huge amount of respect for those who do the same.

“You have a choice: you could play on and that’s it but I think when you reach a certain level, a lot of responsibility comes with it. It’s important to say, though, that you have to perform too. Because if you don’t perform, you don’t have a voice and then you won’t have the same impact. Fact. So that’s kind of been my biggest motivation from day one; I train every day to perform and also give me a voice.

“I have a lot of admiration for people who stand up for what they believe in and who actually use the voice for good. That’s what I’ve tried to do, to stand up for what I believe is good for the women’s game. I think we need to stand up together and for each other and support each other. That’s why I think that Megan Rapinoe should be respected by footballers around the world, because she’s taken a beating for all of us and for the game and we need strong voices like that. The more voices you have, the more impact you can leave on the sport.”

It fits with her philosophy as a player. When people ask what her ambition is her answer is not individual awards and team titles; instead, something much simpler drives her. “My biggest ambition is to maximise the potential in me. To see how far I can push it as a player at the highest level; that’s something that motivates me.”

As does watching a culture shift in Norway as young girls and boys there look to her in the way she looked at the ever-modest Ole Gunnar Solskjær when growing up. “There was a lack of women role models when I was growing up – that’s something that has changed a lot today. That’s very important. I can see the impact all the success that I’ve had with Lyon has not only had on young girls but also young boys in Norway. I feel that’s a big game-changer.”

Hegerberg has won everything there is to win at Lyon and, with her teammates Sarah Bouhaddi and Dzsenifer Marozsan set for moves to the United States, could the Norwegian look beyond France when her contract ends in a year? “I believe in staying loyal to your club,” she says. “I’ve had the most amazing years at Lyon and I have another year of my contract. It’s impossible to say what the future will bring but right now I’m in my own rehab bubble trying to get back on track stronger for Lyon – I have scary plans for that comeback.” - Guardian