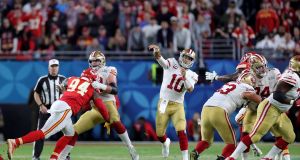 Quarterback Jimmy Garoppolo of the San Francisco 49ers throws a pass against the Kansas City Chiefs during Super Bowl LIV at Hard Rock Stadium in Miami at the start of February. Photograph: Rob Carr/Getty Images

Hannah Gordon has seen it all in the NFL, particularly when it comes to the San Francisco 49ers. She acknowledges football is cyclical, and throughout her nine years, she has seen the good, the bad and the ugly. As the chief administrative officer and member of the general counsel, not much gets passed her in the front office.

“From litigation, to every contract, to when you see a sponsor sign, or when you are going to use the restroom, you want to make sure there is toilet paper in there; there’s a contract to buy all of that. It runs the whole gamut. There is intellectual property issues, employment issues. There’s no shortage of legal work,” she explains, working remotely in the Bay Area.

Football never stops, even with a global pandemic. Gordon still finds herself on Zoom calls, catching up when it comes to the public affairs and how the 49ers can reach its now global fan base is a big deal.

“It’s about how do we interact as an entity with our entire community, with the country, with the globe? Because we have fans everywhere, there’s a 49ers diaspora. How do we connect with those folks? Part of that is our fan engagement, what we do with our women’s club, what we do with our LGBTQ club fan engagement platform. It’s wide-ranging. I think what I love about it is that it is so wide-ranging that I get to deal with all the different people and do all different kinds of work that every day is a little bit different.

“We have been active, since the beginning of the pandemic, in aiding our community through many regional funds in combination with the government. I put on a mask and went over to the grocery store when we did a dinner delivery for frontline grocery-store workers. I did get to see people, and it was uplifting and reminded me of what life was like to before this pandemic. I look forward to that returning, but we’ll have to do the work remotely”.

The environment has changed for Gordon throughout her time working in football. Becoming a fan in UCLA following the beloved Bruins, Gordon saw first-hand just how much of a male-dominated environment sports can be.

“I started in sports journalism, and there were very few women at that time, though there had been significant pioneers. I fell in love with an American broadcaster, Hannah Storm. I saw the way that she was facilitating this witty reportage among all of the folks at the NBA playoff half-time show. I thought, ‘Wow, what a cool, fun job that must be, how do I do that?’ I was the first female to cover football, for the UCLA student paper, and then when at the NFL legal office, I was the only woman in my department who was not in a secretarial role. We’re making progress in the NFL, but we have a long way to go.”

The NFL is trying to make strides in every aspect of its diversity schemes. From enhancing the Rooney Rule and enticing more teams to interview and hire those from minority groups, some would say the 49ers have paved the way for what true equality in the workplace looks like. Gordon was instrumental in implementing a diverse-slate interviewing policy which is being replicated by other teams.

“When we implemented the diverse-slate interviewing policy, it was driven by the fact that we wanted to make sure that we were reflecting our values in what we do internally, so what we say we support needs to be reflected in how we hire, promote, develop employees. It needs to emanate from within our organisation before being something that we’re seeking externally. I would say that was the impetus for it, and in terms of the willingness to do it, it was because we have great ownership that is always supportive in driving that.”

While our interview examines the ins and outs of football and how everything is run, Gordon is aware of what the organisation represented four years ago. Our interview takes place just days after a Minneapolis officer was charged with the second-degree murder of George Floyd. Gordon has a lot to say about the very thing Colin Kaepernick knelt for.

“We, as an organisation, have supported the first amendment and the right to freedom of expression from day one. With respect to the question of racial inequity in the United States overall and where we are today what happened to George Floyd . . . if you’re human, I don’t know how you can watch that and not feel that something is wrong in our country . . . to watch a man slowly die at the hands of another while crying out for his mother.

“We have not been able to change the inequity that has plagued our country for centuries. We’re going to have to change, to be everything that we think the United States can be and live up to our constitution and our ideals. This is a moment for all of us, white Americans in particular, to not only reflect but to take action. To move from being passive and not accountable for how we’re recreating systemic inequity to finding ways that we can be actively anti-racist.”

As for Kaepernick himself? “I am not authorised to speak on that subject in particular. I can’t answer that question. When you see death, and you know that it’s wrong, you also need to recognise how has that been allowed to happen? Because other people stood there and did nothing. Somebody was filming it, and it still didn’t stop.

“These are not isolated incidents, we have some severe issues to grapple with. This is what we’ve been grappling with since the founding of our country. Our original sin of the transatlantic slave trade and slavery continues to infect systems and people, and we have to eradicate that for it not to undermine our democracy fully.”

Off the field, Gordon is making her presence felt, supporting a variety of groups and causes, including Masks for the People, a cause created by Live Free USA, whom the 49ers donated to under their social justice grant scheme in 2016.

“Masks for the People is a humanitarian campaign led by the non-profit Live Free USA and its executive director, Pastor Mike McBride, along with W. Kamau Bell. In the United States, we have a highly tragic number of deaths from coronavirus. One of the challenges that we found is that because of inequities in our health system, the death rate has been higher for African-Americans, more African-Americans are getting coronavirus and dying from it and as well as other vulnerable groups.

“What Masks For The People are doing is ensuring that the most vulnerable are getting PPE such as masks, the hand sanitiser. These are African-American communities, formerly incarcerated people, even getting PPE, sanitisers and equipment into jails where everyone is close to one another.”

Gordon knows how powerful sport can be. She has seen it first hand through the 49ers Foundation and various events. She has also seen how powerful it can be for uniting everyone during the 49ers’ Super Bowl runs under her watchful eye.

“Sport is a microcosm of society. We have a platform that can push the culture forward and has, historically over the last 100 years or so, had many moments in which sports has helped facilitate vital conversation.

“One of the things I love about sports is its potential for creating good. I’ve seen the best and worst of times in nine years. I think if you work at a sports team, sport is cyclical, you will experience highs and lows, and the lows can take it out of you, but the highs are so awesome that it’s worth the rollercoaster.”