Why Andy Farrell is doing an exceptional job; GAA release their annual report 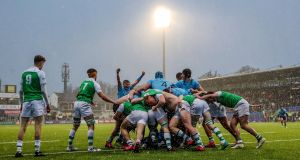 There were two Irish goalscorers in last night’s six Championship matches - Scott Hogan scored the winner for Birmingham against Barnsley and his fellow Irishman Darragh Lenihan was among the goals in Blackburn’s win over Hull City. Second-placed Leeds were held away to Brentford, as they paid the price for a goalkeeping blunder from Kiko Casilla - click here for a round-up of all the night’s matches. Emmet Malone has written an interesting piece about the deep divisions on how to produce better young football players in Ireland: “the bigger question right now given the Rovers controversy and looming implications of Brexit, though, is how to improve standards and then bridge the gap between the under-19 league and the senior game . . .”

In his column this morning (Subscriber Only) Gordon D’Arcy explains how head coach Andy Farrell is putting a fresh shape on Ireland’s attack to partner the fundamentals from the Joe Schmidt era: “Farrell has seven weeks from late January to early March to prime this squad. That’s why a bonus point victory over Wales, keeping old ways yet implementing new methods, is exceptional.” St Michael’s overpowered Gonzaga to reach the last four of the Leinster Senior Cup yesterday - keeping their quest for back-to-back titles very much on track. The 34-3 victory was the result of a dominant performance from their pack and the accuracy of Chris Cosgrave’s boot. Today at 3pm Kilkenny College take on Newbridge College in the third quarter-final of the week. That’s live on Premier Sports 2 from 2.55pm.

1 What evidence is there that the IRA still controls Sinn Féin?
2 Brazilian father to be deported days after daughter’s birthday
3 Ireland suffer Twickenham torture yet again as England dominate
4 Costa living: ‘Move home to Ireland? I’d hate it’
5 Why Sinn Féin will not call the State by its name
6 England 24 Ireland 12: How the Irish players rated at Twickenham
7 Bank leaked my loan request to family who tried to rip me off
8 Spread of coronavirus triggers European travel curbs
9 Ryanair and Aer Lingus monitor impact of coronavirus on travel to Italy
10 Eddie Jones’s comments have already provided Irish team-talk for 2021
11 Dancing with the Stars: Shock exit for teary-eyed Sinéad O’Carroll
12 Patrick Reed ‘was building sandcastles’ in PGA Tour event, says Koepka
13 Coronavirus: Austria restarts train services with Italy
14 Maureen Dowd: For the White House parasite, all restraint has gone
15 Coronavirus: Almost 60 new cases recorded in Italy as two die
16 Anti-Irish bigotry in Britain has not gone away
17 Could a product from Lidl or Aldi change your life?
18 TV View: Sunday Bloody Sunday . . . Not Bono’s fault but Boy, that was Bad
19 Steve Coogan: ‘Come Out, Ye Black and Tans is two fingers to the British’
20 Clare houses surrounded by water evacuated as rainfall warning
21 Boris Johnson's new immigration regime will damage much more than industry
22 I’ve lived abroad for longer than in Ireland. Was I gone too long?
23 Portraying Sinn Féin as a dangerous party is a political strategy
24 England held all the aces in defining battle of the breakdown
25 The words many a journalist dreaded hearing: ‘This is Stephen Joyce’
26 Homes in Co Clare village turned to islands as Shannon flooding continues
27 UK’s immigration plan geared ‘to catch headlines’
28 ‘I wouldn’t be here without it’: The importance of exercise to teenagers
29 David McWilliams: Germany needs a new business model
30 Ben Affleck: ‘It took me a long time to admit I am an alcoholic’
31 ‘The IRA has gone and they are not coming back. That’s the reality’
32 Patrick Reed is far from the only golfer to bend the rules
33 Court to deliver judgment on Graham Dwyer’s phone data
34 TV guide: 28 of the best shows to watch this week
35 When the RIC opened fire on a crowd in Ennis during the Clare grain riots
36 Mastercard to create 1,200 new jobs by expanding base in Dublin
37 I’m happy I went vegetarian. I have no desire to eat meat again
38 Would you kill one person to save five? Depends if you’re a millennial or not
39 The view from Clondalkin: If Sinn Féin don’t get in, ‘there will be marches’
40 How Maura O’Connell won over more than just women’s hearts
Real news has value SUBSCRIBE