Wales get their revenge; McIlroy and Tiger on fire in Pennsylvania 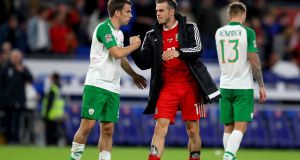 An injury-hit Republic of Ireland team began their Uefa Nations League campaign with a 4-1 defeat to Wales last night. With Gareth Bale pulling the strings, Ireland were totally overwhelmed as Wales cut loose at Cardiff. Emmet Malone writes: “If you are inclined to count it as the start of a qualifying campaign then it was a bad one; the worst, in fact, since the preliminaries for the 1962 World Cup when Ireland lost their opening game, also by four goals to one, in Scotland.” Best for Ireland on the night was Callum Robinson, making his debut.

Rory McIlroy and Tiger Woods put on stunning shows in the opening round of the BMW Championship in Pennsylvania to tie each other for the lead at eight under. Out early, it was a 62 for Woods, tying the course record and getting within one of his career low round. While thoughts of a 59 for McIlroy were dashed with two bogeys in his closing three holes.

1 When the RIC opened fire on a crowd in Ennis during the Clare grain riots
2 Costa living: ‘Move home to Ireland? I’d hate it’
3 Anti-Irish bigotry in Britain has not gone away
4 ‘I never truly understood what community meant until I moved to Donnycarney’
5 Steve Coogan: ‘Come Out, Ye Black and Tans is two fingers to the British’
6 England v Ireland preview: Ireland’s revival to face its sternest test
7 David McWilliams: Germany needs a new business model
8 Tyson Fury king of the world again after he stops Deontay Wilder in the seventh
9 Bernie Sanders cements lead in Democratic race after win in Nevada
10 Is my drunken, abusive husband capable of change?
11 Ryanair’s Michael O’Leary under fire for comments on Muslim men
12 Coronavirus: Almost 60 new cases recorded in Italy as two die
13 Floods in the midlands: ‘If this was happening in Dublin it would be front-page news’
14 Archbishop: Sex abuse of women by L’Arche founder ‘reprehensible’
15 Blue Brexit passports made by European firm to be issued from next month
16 Would you kill one person to save five? Depends if you’re a millennial or not
17 Sinn Féin to hold public meetings around country to rally support for government efforts
18 Pat Leahy: Fianna Fáil and Fine Gael will not crawl off and leave McDonald the stage
19 Lithuanian man given until midnight on Saturday to leave Ireland
20 Varadkar resigns amid warning impasse will hit the economy
21 The view from Clondalkin: If Sinn Féin don’t get in, ‘there will be marches’
22 30 great family holiday destinations in Ireland and abroad
23 Fintan O’Toole: Irish voters' actions are not populist – just sensible
24 ‘I joked about swapping bodies’: The story of a trans couple in Sligo
25 Easy homemade pizza for carnivores and vegans alike
26 ‘I wouldn’t be here without it’: The importance of exercise to teenagers
27 Fintan O’Toole: Trial runs for fascism are in full flow
28 Dancing With The Stars backstage: ‘I’d love to see Danny Healy Rae out there’
29 Paul Flynn: How to cook the perfect chowder – don’t use flour and keep it simple
30 Uncovering Ireland’s lost field names before it’s too late
31 Gardaí wish to speak to taxi driver after girl dies in Cork car crash
32 Planning a move to Australia? Here’s everything you need to know
33 My husband is acting like an extra child in the family
34 Six Nations - Ireland v England: TV details, kick-off time, team news and more
35 Irish pack must expose the weakness in England’s backrow
36 Elisabeth Moss: ‘Something is actually wrong here and I’m not going crazy’
37 Parties to continue talks with Sinn Féin despite Drew Harris’s IRA comments
38 Martin Hayes: ‘Retirement is a terrible disaster if it’s something you love doing’
39 Paul Mannion pounces as Dublin see off unlucky Donegal
40 EastEnders reaches peak absurdity with a 35th anniversary shipwreck
Real news has value SUBSCRIBE