For many fans, but not all, his reputation has been instantly damaged overnight 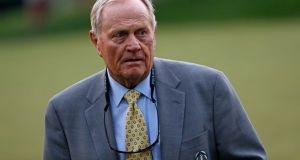 Jack Nicklaus won his first major in 1962, beating Arnold Palmer in a US Open play off. It was a different world. File photograph: Getty Images

In normal times there would be nothing noteworthy about American golf’s most successful ever player endorsing a Republican president for another term in office. But when Jack Nicklaus took to Twitter and Instagram to pledge his vote to Donald Trump, the thousands of accompanying comments formed a quick and furious sketch of the chasm between right and left.

The Golden Bear turned 80 this January and represents for millions of Americans a sporting icon emblematic of a more easily graspable time. There he is, perpetually sun-kissed, mop-haired and slightly reticent as he acknowledges the timeless applause of the galleries of the prospering 20th century: an uncomplicated hero.

So the responses to Nicklaus’s endorsement were predictably emotive: ecstatic in support, heartbroken vows to sell signed keepsakes, frequently derogatory condemnations and defences. And in precisely one instance amusing: “Disappointing! I loved you in The Shining.”

It’s inevitable that the hot debate on the most polarising political figure in living memory should spill onto America’s greens and fairways. The character of Trump the Golfer has rumbled along as a kind of sidebar cartoon strip from the very beginning of his campaign for the White House, when he habitually took issue with the number of days that Barack Obama spent on the golf course.

Four summers ago, as he whipped up the storm of support that blindsided all expectations, Trump speculated that if elected president, he would be too busy for the game. “Who would want to leave the White House,” he asked incredulously. Golf News Network is just one tracking source of the number of days Trump took to the golf course: 293 rounds from taking office in January 2017 to the end of this September.

Just one of the many Trump-themed books of the last four years revolved around his form as a golfer. Rick Reilly’s Commander In Cheat is hardly the most subtle title and was written after the former Sports Illustrated columnist, who has a long association with Trump, was motivated to come out of retirement to write the book because the president’s boasts about his golf achievements infuriated him.

“I kept seeing on my Twitter feed: I’m a champion. You should vote for me because I’ve won 18 club championships,” Reilly recounted to Donald McRae in a Guardian interview. “Whoa! That’s a lie because you already told me how you did it. Whenever you open a new course, you play by yourself and declare yourself club champion. I’m like, that’s a shitty lie.”

The book parallels Trump’s ethics on the golf course with the patterns that have left so many Americans horrified and gobsmacked by his conduct before and since assuming office in the White House. The brazen untruths, the manipulating and the re-shaping of events to suit his own vision, irrespective of what other people saw and knew.

Apart from the fabricated club titles, Reilly spoke with former caddies and playing partners left flabbergasted by his unsubtle cheating.

Among Trump’s wilder claims is that he has a handicap of 2.8. To put that in context, Jack Nicklaus, who has won more golf majors than any player of the history of the game, currently has a handicap of 5.2. Trump is seven years younger than Nicklaus but Reilly asks a rhetorical question: “If you needed a partner for a death match . . . would you take Trump or Jack Nicklaus?”

Golf courses feature heavily during the recent New York Times revelations into Trump’s financial records: it’s estimated that the 17 golf courses he owns have lost a total of $315 million since 2000. Through the worst of times, Trump has continued to find time to golf. He took to the course on Memorial Day, a holiday infamous for coinciding with the date that American coronavirus deaths reached 100,000. That was in May: it has since doubled.

On Friday, America stood on the brink of nine million cases. Nicklaus, incidentally, has stated that he already tested positive for and, thankfully, recovered from the virus.

Nicklaus is just one of millions of Americans to vote for Trump and he has voiced his support from the beginning of his presidency. But such an explicit declaration on the eve of the election count and coming after such a traumatic and divisive summer in America is to nail his colours to the mast. After everything.

And that’s why there has been such an avalanche of dismay from so many at Nicklaus’s public avowal. Nicklaus won his first major in 1962, beating Arnold Palmer in a US Open playoff. It was a different world: JFK was president, America in Camelot.

Since then, Nicklaus has stood for a particular kind of American grace: inherently decent, rigorously modest as he walked through a blaze of glory, a success story, a philanthropist, a paragon of family values, polite to a fault and well-intentioned if perhaps narrow in view and a devotee of the status quo.

But a reputation created over half a century has been instantly and irredeemably damaged overnight in the eyes of many of Nicklaus’s former fans – and equally, enhanced for those fans of his who will also be voting red.

Golf is a rarefied sport. There are vast swathes of US society who never have and never will see a golf course and for whom that world is unattainable. The fascinating thing about Nicklaus’s message is that it shines a light on attitudes within the old prevailing orthodoxy: the suburban and business classes, the leisure and pleasure-driven - and the privileged. And they are mad as hell.

So as America hurtles towards what promises to be a crucial, fiery week in its modern history, there is only one certainty. Donald Trump will indeed be too busy for golf.