Tottenham brushed aside by Bayern, could the clock be stopped at scrum time? 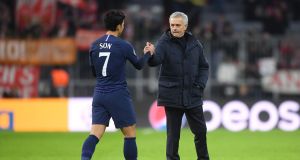 The line-up for the last-16 of the Champions League is complete, after the final round of group fixtures took place last night. Tottenham Hotspur’s place in the knockouts as Group B runners-up was already confirmed and they were beaten 3-1 away to Bayern Munich in a dead-rubber. The hosts took the lead at the Allianz Arena through Kingsley Coman before the impressive Ryan Sessegnon equalised after 20 minutes. That was as good as it got for José Mourinho’s weakened side however, with Thomas Muller and Philippe Coutinho giving the Bavarians a comfortable win. Earlier in the night, Manchester City rounded of their group campaign with a 4-1 win over Dinamo Zagreb, Gabriel Jesus scoring a hat-trick as his side came from behind in Croatia. Elsewhere, Real Madrid beat Club Brugge, Juventus won at Bayer Leverkusen and PSG thrashed Galatasaray 5-0. The draw for the next stage will be made on Monday December 16th. Tonight the Europa League group stages are completed, with Manchester United needing to avoid defeat to AZ Alkmaar at Old Trafford in order to progress as group winners (kick-off 8.0pm).

Elsewhere in today’s rugby statistics column John O’Sullivan has asked if it would be feasible for the match clock to be stopped at scrum time - following Munster’s tight Champions Cup win over Saracens last week. And, he concludes, the answer is no. He writes: “Stopping a match for scrums would see the amount of time it takes to complete a game at present, edging closer and closer to the two-hour mark, move appreciably beyond it. If such a mechanism had been in place at Thomond Park last Saturday, then there would have been an additional 21 minutes to get through but the main argument against the idea would centre on player welfare.” Meanwhile the All Blacks have confirmed Ian Foster will replace Steve Hansen as head coach of the All Blacks, the 54-year-old being promoted from his role as assistant on a two-year deal.

1 Corey Taylor: After 20 years in Slipknot we are all beat up
2 Bodies of three children found at house in Dublin
3 Bodies of three young children found in house in Dublin
4 Brexit is a collective English mental breakdown
5 Stephen Joyce, last direct descendant of James Joyce, dies aged 87
6 Miriam Lord: Ladies in a lather as Leo barrels into hair salon
7 Cliff Taylor: Brexit did, after all, mean Brexit
8 BBC’s Fergal Keane treated for post-traumatic stress disorder
9 A vegetarian and a non-drinker visit Ireland: here’s their verdict
10 Fintan O’Toole: Historians will not believe sheer ignorance of Brexit supporters
11 Seamus Mallon: Forceful Northern politician who denounced IRA violence
12 Luggala lots sell high in London, Carton house table unsold
13 Cycling or swimming, walking or yoga: What is the best exercise for you?
14 Jürgen Klopp insists Liverpool title party is not on his mind
15 Asylum claims by Georgians and Albanians brought to abrupt halt
16 Irish conductor the first woman to lead orchestra at Oscars
17 The sad, secret life of Whitney Houston
18 The Turning: This film is a total waste of time. Don’t even read the review
19 Child (4) died of viral infection following nap at Cork creche
20 Man appointed as executor of €5.1m estate should be replaced, court rules
21 Why Ireland cannot forget the Holocaust
22 Trump’s defence team gets set to take floor at impeachment trial
23 Owen Doyle: Creeping professionalism of schools rugby a threat to the game
24 50 hidden gems Netflix probably won’t recommend for you
25 ‘Men like Seamus Mallon don’t come along too often’
26 The Irish Times view on fixing the housing crisis: yes we can, and we must
27 The Goop Lab: One episode is about the vulva. I’ll probably watch that with my parents
28 52 places to go in 2020: Here’s where the New York Times says you should visit
29 Seamus Mallon: Tributes paid from across political spectrum
30 Farmer seeks to challenge €3.6bn Intel plan in High Court
31 200 watch as Iran executes 5 for drug offences
32 Hilary Fannin: What I wish my spouse and I had done the morning of our wedding
33 Who are Ireland’s 17 billionaires?
34 Will the real Chuck Barris step forward . . . Hit man: fact or fiction
35 Cosgrave should give his speech to Web Summit’s partners in Saudi Arabia
36 Voters in Dún Laoghaire: ‘Every single way I look at it, it’s difficult’
37 Fresh delays and millions in extra costs for children’s hospital revealed
38 Pall hangs over Germany ahead of Auschwitz anniversary
39 Sean Lynch’s A Murmur, Repeated: Exploring Stonehenge as a cultural phenomenon
40 Don’t hibernate: there’s plenty to do in the January garden
Real news has value SUBSCRIBE