Tottenham are all business at Marine; Six Nations hopes in the balance 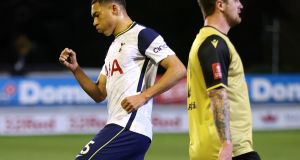 There was no FA Cup fairytale yesterday, as José Mourinho’s Tottenham Hotspur routed non-league Marine in the third round. Spurs were 5-0 winners at Rossett Park, with Carlos Vinícius scoring a hat-trick against the side from England’s eighth tier. Among the day’s other fixtures League Two Crawley Town beat Leeds 3-0, with television celebrity Mark Wright coming off the bench to make his debut against Marcelo Bielsa’s side. There were also wins for Chelsea and Manchester City, while Brighton needed penalties to beat Newport County. Tonight West Ham play Stockport County at Edgeley Park, with the draw for the fourth and fifth rounds to take place afterwards.

The 2021 Six Nations is scheduled to start on February 6th, however hopes the tournament can go ahead remain in the balance. This is due to rising coronavirus rates in Ireland and the UK, which could lead to France being unable to take part in the Championship. Gavin Cummiskey writes: “The French government’s instruction for rugby clubs to cancel cross border competition “in the short term” makes the postponement of the 2021 Six Nations a real possibility. The coronavirus variant spreading across the United Kingdom and Ireland has already led to a travel ban into France which is expected to override a previous exemption for elite sports.”

7 Stabbed teenager with ‘beautiful soul’ had ‘bright career ahead’

9 Covid-19: International travel may not be possible by Christmas – Varadkar

10 Mairead McGuinness: They don’t call me ‘Elbows McGuinness’ to my face

11 GameStop focus of war between Wall St and small investors

13 If the vaccines row wasn’t real, Boris Johnson would have to invent it

18 Millionaire couple travel to get vaccine intended for indigenous Canadians

21 Can five minutes’ exercise a day make you fit?

22 Sharp increase in the number of Covid-19 family outbreaks

28 The Holocaust: How to say ‘never again’ and mean it

31 ‘I think my husband has a drug problem, but he says that’s nonsense’

34 Who is going to pay for costs of working from home?

36 Range Rover Sport D350: Fab to drive. But everyone you pass will hate you

38 ‘Horrendously out of proportion’: Residents set against 19-storey apartments

40 Kathy Sheridan: Pandemic is reminder of poison in British and Irish politics