Tiger Woods has had surgery for multiple fractures of his right leg after a car accident that a Los Angeles police officer said he was “very fortunate” to have survived. Video: Reuters 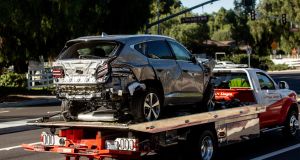 Tiger Woods’s car is towed away after a car crash in Rancho Palos Verdes, California. Woods suffered multiple leg injuries and went into surgery after crashing his car on Tuesday morning, his agent and the authorities said. Photo: Allison Zaucha/The New York Times

Tiger Woods is “awake and responsive” after undergoing significant surgery on multiple right leg fractures following a car crash in California yesterday. News broke last night the 15-time Major winner had been injured when his vehicle came off the road and rolled over an embankment near LA. Woods was extricated from the car by emergency services and LA county sheriff Alex Villanueva has said there was no evidence of impairment from alcohol or drugs in Woods’s system. Woods is no stranger to surgery during a career marked with multiple knee and back injuries and this morning Philip Reid writes that there must now be serious question marks over the former world No1’s chances of playing competitively again. Meanwhile, Malachy Clerkin writes that the response to the news last night showed just how big the Woods draw is and how there are few other sportspeople in the world who would garner such attention. “That’s been the way of it ever since his first appearance in a professional golf tournament this week 29 years ago,” he writes.

Moving on to rugby and this morning Gordon D’Arcy writes that Ireland’s meeting with Italy in Rome this Saturday has a real crossroads feeling to it. Andy Farrell’s men go into the match on the back of losses to Wales and France and badly in need of a confidence-boosting performance. “The current playbook – essentially, Mike Catt’s attacking philosophy – has yet to be learned by this Irish squad despite plenty of time on and off the field since December 2019. The exam results do not lie,” D’Arcy writes. Meanwhile, Johnny Sexton dropped a hint yesterday that the 2023 Rugby World Cup may be a bridge too far for him but the Ireland captain then later rowed back on that, saying it was just a “throwaway comment”. “The poor fella must be weary of being asked about his future, but this is not to say he won’t be offered another one-year deal on foot of that one, or that he won’t yet play through until the 2023 World Cup. Only time will tell,” writes Gerry Thornley.

7 Tenant promises to pay compensation after removing rafters from house

14 Boy injured after bookcase fell on him secures settlement of €80,000

16 Can I see copies of earlier wills my mother wrote?

17 ‘He’ll be missed’: Locals turn out to say goodbye to popular shopkeeper

24 How supermarkets trick us into buying unhealthy food, and what we can do about it

26 Q&A: Where do we stand on AstraZeneca vaccine now it is restricted to over-60s?

28 On the centenary of Northern Ireland’s birth, let’s imagine a potential rebirth of Ireland

30 Is it sensible to delay vaccines if we are at risk of a fourth wave of the virus?

31 Vaccine rollout to be ‘reset, not revamped’ after AstraZeneca decision – Reid

33 Evictions can recommence from April 23rd

35 Mary Coughlan revisits her past: ‘It was everywhere. Bags of cocaine, champagne and tequila’

36 My Bloody Valentine: Very loud, very fuzzy, and heading back to their Irish studio

37 Covid-19: AstraZeneca vaccine should not be given to patients under 60, Niac advises as appointments cancelled