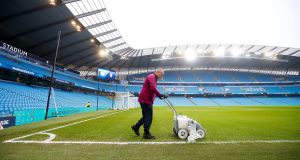 The English Premier League returns tonight, first with Aston Villa v Sheffield United at 6pm and then Manchester City host Arsenal at 8.15pm. Both games are on Sky Sports. “Welcome to 92 live games in six summer weeks, to deserted stands, video walls and the strangling of the post-match quotes industry. Welcome to the new abnormal normal. And yet for all the disquiet in getting to the start line, it is impossible not to feel fascinated by the prospect.” Here in Ireland the FAI will today resume their efforts to secure an agreement with clubs to get the Airtricity League up and running again. There may be an attempt to compress the proposed conclusion of the season so that it starts in early August then ends in late October or early November. The FAI is also hoping to be allowed sell almost 18,500 tickets for its game against Finland in the event that Uefa confirms a September kick-off for the second edition of the Nations League.

Darragh Ó Sé’s weekly column returns today and he explains why a Kingdom without football is very hard to get your head around (Subscriber only): “As we sit here now, it looks like we’re going to get some games after all. The appetite for games is huge. The first Junior B game will be an all-ticket affair. When the inter-county stuff starts up, we’ll be wearing heavier coats and woollier hats but that’s no hardship either.” The GAA has announced plans for its 2020 Cúl Camps and a television series build-up on TG4. Camps will start on 20th July, which is Phase 4 of the lockdown relaxation schedule. As long as the Government maintain the two-metre ruling on social distancing it will not make any financial sense for the IRFU, the provinces or the ground controllers to open the Aviva Stadium to rugby spectators on match days. Gerry Thornley explains why rugby needs matchday spectators more than soccer does, and “as two-metre distancing would restrict the capacity to 8,200, the ensuing gate receipts would scarcely, if even, cover the costs of opening the stadium.” The IRFU will begin a programme of testing players and staff from Leinster and Munster on Wednesday for Covid-19 in advance of their return to training in their respective High Performance Centres next Monday.

1 Michelle O’Neill will not step aside ‘under any circumstances’ despite calls from other parties after Storey funeral
2 Health officials ‘very concerned’ about foreign travel, says Donnelly
3 Why are markets booming when a crash is on the way?
4 World, look away now – these are dark days for the United States
5 ‘Ten of the best books set in Ireland’: Does the Guardian get it right?
6 ‘Grossly irresponsible’- Waterford mayor condemns house party of 60 people
7 John Cleese has a faulty sense of humour about the Irish
8 Bobby Storey: The IRA's planner and enforcer who stayed in the shadows
9 Irish holidaymakers have been thrown under the bus
10 How much do Irish people earn? And what will Covid-19 do to our wages?
11 Who are the new junior ministers? All their profiles are here
12 Trump says Covid-19 will disappear after US reports record increase
13 Thousand acre Offaly farm guiding €9m biggest land sale in years
14 Open Ireland as soon as possible - Tourism chief warns of 'catastrophic' impact of pandemic
15 Sentence for attempted murder by teen in Dun Laoghaire too lenient, court finds
16 Woman who said ‘I have the virus’ and coughed in direction of paramedics jailed
17 Shared parenting: fathers being forced to go down ‘adversarial route’
18 Irishwoman in Athens: ‘Being stuck in Greece isn’t exactly a hardship’
19 Sex, swearing and flushing the loo: 10 films that broke taboos
20 Could your old car be giving away all your secrets to its new owner?
21 ‘I felt something furry move under my hand. Man alive, I am terrified of rats’
22 Dunnes Stores trials online ordering from Cornelscourt outlet
23 Newton Emerson: A unionist-free Seanad? Nobody minds really
24 Netflix: 10 of the best new shows and films to watch in July
25 Full line up of junior ministers unveiled as Taoiseach accused by one TD of snub
26 Tánaiste questions number of construction workers on pandemic payment
27 How the Government can woo young Sinn Féin supporters
28 Permission sought for €150m film and media campus in Wicklow
29 Husband of Jean Eagers charged with her murder
30 In turmoil on and off the pitch: Where did it all go wrong for Barcelona?
31 Up to 400 jobs saved in Cavan as MML takes stake in CG Power Systems
32 Ireland left out as EU opens borders to 15 states including Australia, Canada and Japan
33 Covid-19 risks from international travel remain dangerously high
34 Who is in the new Cabinet? Members in profile
35 Limerick’s Shane Dowling forced to retire at 27
36 ‘I wouldn’t fly if I didn’t think it was safe’ says passenger boarding flight at Dublin Airport
37 Covid-19: Publicans and restaurateurs row over calls for VAT cuts
38 Expert tips: A psychotherapist on how to look after your relationships
39 Ryanair passenger traffic slumps 97% as shutdown restricts travel
40 Trophy Curragh stud farm with exceptional pedigree for €4m
Real news has value SUBSCRIBE