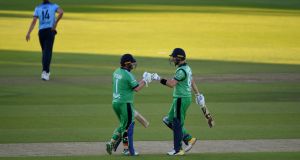 A partnership of 214 between Paul Stirling and Andrew Balbirnie set up Ireland’s seven-wicket victory over England in Southampton. Photograph: Mike Hewitt/Getty

A stunning partnership of 214 between centurions Paul Stirling and Andrew Balbirnie inspired Ireland to a famous seven-wicket win over world champions England at The Ageas Bowl last night. Having been asked to bat first Eoin Morgan’s 106 steered the hosts to an imposing 328 all out from 49.5 overs. Ireland’s reply saw them reach 50 without loss before the dismissal of Gareth Delany for 12 brought together Stirling and Balbirnie. The duo then set about England’s bowlers to produce one of the finest stands in Irish cricket history, with the score reaching 264-1 before Stirling was run out after making a thunderous 142 off 128 balls. Balbirnie followed after a captain’s innings of 113 but Ireland weren’t to be denied, with Kevin O’Brien - the hero of 2011 - and 20-year-old Harry Tector nursing their side over the line with a ball to spare. After Ireland’s landmark victory in Southampton - which saw the three-match ODI series finish 2-1 to England - Balbirnie said: “It’s a huge win for us and this group. For the young guys to be involved in this series but to also be involved in a win like that is special and one we’ll remember forever.” Meanwhile in Manchester England’s Test side get the first of three matches against Pakistan underway today, with play at Old Trafford due to start at 11am.

Elsewhere European football resumes tonight, with Manchester United taking on LASK at Old Trafford in one of four Europa League ties. Ole Gunnar Solakjaer’s side are all but through to the quarter-finals following their 5-0 first leg win in Austria on March 12th. Tonight’s fixtures set up a run of 26 Europa and Champions League fixtures which will be played between today and August 23rd. Meanwhile Fulham are back in the Premier League, after they beat Brentford 2-1 after extra-time in last night’s Championship play-off final. The west London sides couldn’t be separated after 90, but Joe Bryan’s 105th minute free-kick broke the deadlock at Wembley before a second 12 minutes later secure a return to the top flight for Scott Parker’s side.