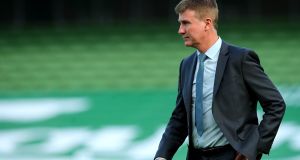 Stephen Kenny’s Ireland team again failed to score but still earned a draw against Wales on Sunday at the Aviva. Photograph: Inpho

Stephen Kenny is still awaiting his first win as Republic of Ireland manager after his 10-man coronavirus-hit side was held to a 0-0 Nations League draw by Wales in Dublin. His team’s preparations were thrown into disarray when five players were ruled out after one of them tested positive for Covid-19. In his column this morning, Ken Early explains why Ireland are a work in progress on and off the field: “Given the chaotic build-up it feels slightly ridiculous to spend too much time analysing the game on a technical level. After the “who’s next” drama of Covid positives and the farce of multiple late withdrawals, the familiar rhythms of a 0-0 draw felt almost structured and soothing.” Three days after the highs of Thursday’s dramatic penalty shoot-out win over Bosnia and Herzegovina, Northern Ireland were brought back down to Earth in a 1-0 home defeat to Austria.

The Irish rowers enjoyed an excellent conclusion to the European Championships in Poznan on Sunday; seven crews, one final session, four medal winners, the other three ranked in the top-eight. The pick of the bunch of course being Sanita Puspure’s gold medal. Making her a double World and European champion at the age of 38, Ian O’Riordan reports; “a sixth international medal for Puspure, having also won European bronze twice before, and although two months shy of her 39th birthday, Puspure has laid down another big marker before Tokyo 2021.”

1 Trump endorsement by Jack Nicklaus leads to avalanche of dismay
2 Over 90m vote early as winning post looms for Trump and Biden
3 Supermarkets compared: How Dunnes, Lidl, Tesco and M&S measure up
4 Gardaí believe men in Cork murder-suicide chose to let woman survive
5 The Irish living life for less in sunnier climes
6 Richard Ford: America could fail. I have never felt this way before
7 Varadkar rejects allegations he acted unlawfully in sharing draft GP contract
8 France 35 Ireland 27: Ireland player ratings
9 Cork shootings: Mourners at Mark O’Sullivan’s funeral told of devoted and caring son
10 Caitlin Moran: ‘In middle age you lose the amount of f**ks you give’
11 Fintan O’Toole: Defeat for Donald Trump will shape our world
12 Explainer: The GP contract talks at the centre of Varadkar controversy
13 Nigella Lawson: ‘I feel insecure if I don’t know what I’m going to eat’
14 Ireland fall short against France as England win Six Nations title
15 Jennifer O'Connell: Ireland's pandemic compliance is extraordinary
16 The real Contagion virus is out there and it’s causing virologists to worry
17 US election: Trump using executive orders to reshape fabric of America
18 The West has failed – US and Europe have made a mess of handling the crisis
19 Coronavirus: What can Ireland learn from an Australian state’s Covid-19 success?
20 Sean Connery the man has died. Sean Connery the indestructible legend lives on
21 Irish surfer Conor Maguire rides ‘Ireland’s biggest wave’
22 ‘This could be Belfast in 1968’: How political conflict in the US could descend into violence
23 Covid-19: Johnson announces second lockdown for England
24 Even if Biden becomes president, there’s no turning back
25 David McWilliams: A plan to put Ireland’s 200,000 vacant buildings to use
26 Stockdale’s blunder and French flair: Where Ireland came undone in Paris
27 Johnny Sexton rues what might have been on a frustrating night in Paris
28 Coney Barrett unfairly targeted in attacks over childcare
29 Aoife Noonan’s How to be a Better Baker Part 1: Light and airy sponge cake
30 Covid crisis: 416 new infections bring October total to almost 25,000
31 Ireland ‘outperforming almost all European countries in controlling spread of Covid-19’
32 The sad, secret life of Whitney Houston
33 Kanturk farm shootings: A timeline
34 Most face masks to protect against coronavirus do not meet standards
35 Murder inquiry opened after deaths of mother and two children in south Dublin
36 Developers may need to go back to the drawing board as one-beds fall from favour
37 Classic horror: the 10 most terrifying short stories ever written
38 James Bond has always been a misogynist dinosaur. Now he has to change
39 Paul Flynn: My take on a famous pork shoulder feast
40 Cork shootings: ‘Devastation was impossible to imagine’, funeral hears
Real news has value SUBSCRIBE