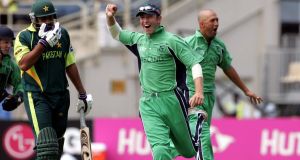 Andrew White and Andre Botha celebrate the wicket of Inzmam-Ul-Haq during Ireland’s famous win over Pakistan in 2007. Photograph: Morgan Treacy/Inpho

New Republic of Ireland manager Stephen Kenny has vowed to do things his “own way,” as he replaces Mick McCarthy and begins what he has called his “ultimate job.” Speaking yesterday for the first time since his appointment last weekend, former Dundalk and Under-21s boss Kenny outlined a positive vision for Ireland going forward, and suggested many of the building blocks for success are already in place, particularly at the back. “I looked at the back four against Denmark: Doherty, Egan, Duffy and Stevens and in my informed view that is in the top 10 of back fours in Europe. That’s what I feel.” The 48-year-old emphasises control will be key for his side going forward, and he wants the first team to set out a blueprint which the rest of the country will want to follow. He said: “I would like schoolboy teams and academy teams throughout the country to look at the senior international team and think: ‘that’s how we want to play’. That they connect with it at that level. That is my dream.”

Elsewhere in today’s whole new ball game column Malachy Clerkin has imagined the 2020 Ulster Championship final being played in the depths of next February, and the tailback of Tyrone fans as they try to make it across the Covid-border to Clones. He writes: “When the restrictions started to be lifted in the South and the counties started talking seriously about getting the games up and running again, Ulster GAA people began to get that old invisible feeling. How could you organise the All-Irelands when six of the counties has been under different conditions all this time?”

1 Donald Trump is in trouble, and that could spell very bad news
2 Larger retail stores to reopen on Monday ahead of schedule
3 House parties are being held ‘with abandon’, Holohan warns
4 O’Doherty and Waters ordered to pay legal costs of case against State over Covid-19 laws
5 Paddy Raff: Comedy star of the coronavirus lockdown
6 Taoiseach says €350 pandemic payment to be cut for some part-time workers
7 Coronavirus: Ireland has higher per capita death ratio than US, study finds
8 Coronavirus: Five more deaths brings toll in State to 1,664
9 Madeleine McCann case: ‘We assume the girl is dead’, German prosecutors say
10 Body trouble: How to keep actors safe while filming sex scenes
11 August the right time for primary schools to reopen
12 14 bank accounts frozen as five men arrested over links to global crime gang
13 Two teenage girls charged with murder of Cian English on Gold Coast
14 Irish company MyBio to sell 10-minute Covid-19 antibody test
15 Church of England distances itself from Irish language ruling on gravestone
16 Strict rules on queuing as Dublin shops prepare to reopen
17 Angela Merkel sweeps in to save the euro zone
18 Lifting the lockdown: A new way of buying and selling houses
19 Villa oasis by the Forty Foot in Sandycove for €1.95m
20 Covid-19: Limited easing of restrictions proposed as pressure grows to reopen economy
21 Direct provision system not comparable with a man killed by police - Varadkar
22 Racism in Ireland: ‘‘You dirty black *****’ – I don’t want to say the word out loud’
23 Newton Emerson: Brussels playing games with Irish sea border
24 Pandemic payment may be tapered based on previous earnings
25 Tyrone midwife on the cover of Vogue magazine
26 In six months we will be in the grip of a 1980s-style recession
27 Property market: Is now the time to buy?
28 Aer Lingus wants quarantine period axed to resume flights in July
29 Luke ‘Ming’ Flanagan bares his bottom half to European Parliament
30 How a GAA club sprang up in east Belfast over Sunday breakfast
31 Kickstart a bright future with Lidl’s innovative work and study programme
32 Normal People: Full-frontal nudity was not its most radical feature
33 When did pursuit of personal development become so entwined with doing?
34 A million beers await drinkers as Europe's bars reopen
35 Don’t expect a bonanza for Ireland from the EU’s €750bn recovery cash
36 Online summer camps for children and teenagers
37 Cycling made easier with an Irish-made electric bike
38 Normal People: The origins of Connell and Marianne
39 Remote working: Ending the lunacy of pointless commutes
40 Barack Obama urges those protesting in US to seize the momentum
Real news has value SUBSCRIBE