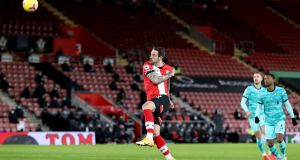 Liverpool’s poor Premier League away form continued last night as they were beaten 1-0 by Southampton at St Mary’s. Ralph Hasenhüttl’s side took the lead after just two minutes thanks to a lobbed effort from Danny Ings, and the Saints held on admirably to secure all three points. The win moves Southampton up to sixth in the table - Liverpool stay top on goal difference, for now. Tonight sees the first League Cup semi-final take place - a rare London derby between Tottenham Hotspur and Brentford (kick-off 7.45pm). And Jose Mourinho is well aware of the importance of the fixture, as he looks to end Spurs’ 13-year wait for a trophy. “”Is this my biggest game since arriving at Spurs? Yes, I think so,” Mourinho said. “In the perspective of the club chasing silverware for many years, I would say so.”

In his column this morning Gerry Thornley has questioned the viability of the season-ending Rainbow Cup, which will see the 12 sides currently competing in the Pro14 joined by four South African franchises for a tournament running from April to June. This, as he writes, clearly poses logistic difficulties: “However, on the premise that the Lions tour, much like the Olympics, will be deferred for a year and postponed until the same dates in 2022, the situation in South Africa could also make the Rainbow Cup a risk not worth taking.” The creation of the Rainbow Cup has also resulted in a stunted Pro14 season with no playoff quarter-finals or semi-finals, something which means there will be numerous dead rubbers played out ahead of the final on March 27th. “Furthermore, as things stand at most only five games - namely the five Irish derbies - will feature matches where both sides still have a tangible interest in the destiny of the title.”

6 Kremlin accuses US of backing anti-Putin rallies across Russia

11 More than half in North want vote on a united Ireland, poll finds

12 Emma de Souza: My generation deserves to have its say on Irish unity now

20 Sweden to close border with Norway after Oslo locks down

27 Badge of distinction: Meet the first Sikh in the Garda Reserves

28 Oscar Wilde, my grandfather, ‘talked himself into prison’

34 A Kerala Kitchen curry for the weekend

35 Conor McGregor stopped by Dustin Poirier in second round

36 My first year as a TD: ‘I felt like I was working in a blizzard’

37 Teaching was Jerry Kiernan’s vocation; in 30 years he never missed a day

38 Chris Johns: If this is to be the last lockdown it must work

39 Five habits learned during the pandemic that we should keep