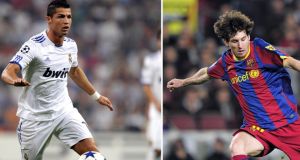 The two playmakers of El Clasico, Real Madrid’s Cristiano Ronaldo and Lionel Messi of Barcelona, will be the focus of fans at the Bernabeu. Photograph: Getty Images.

One of the cliches first: a country will come to a standstill tonight. Real Madrid versus Barcelona stops Spain. According to legend, and a fair amount of hard evidence, only the odd, obtuse character among the population’s 47 million will look away at 6pm local time. The rest will have eyes on the Bernabeu.

We can say with some confidence that this is a game which grips a nation, although in Catalonia the intervention would be quick: two nations. In fact, as Sid Lowe says in his rich, engrossing book on the rivalry, Fear And Loathing In La Liga, according to Barcelona supporters it is: “The nation against the state.”

And immediately, in five words, you’re involved, involved in something broader than football.

Lowe rattles off history and statistics, brings in General Franco and Luis Figo, relates an opinion poll in which people were asked “Real or Barca” and only 11 per cent replied “neither”. He reports the estimated global television audience in over 30 countries taking the game live and doubts the 400 million figure given by TV companies. Yet, even if it’s 300 million, or 200 million, the record Superbowl audience is 112 million.

El Clásico has become an event, the phrase itself a trademark. It now has a currency way beyond La Liga and is part of our sports calendar, like the Grand National or the Six Nations. There is renewed talk in Premier League football about a “Game 39” to be played abroad. There’s an argument to say we’ve already got it: El Clásico.

Primary schoolchildren today know as much about Cristiano Ronaldo and Lionel Messi, if not more, than they do about Wayne Rooney or Robbie Keane. Gareth Bale did not enter their imaginations because he left Tottenham, he entered because he joined Real Madrid. That is the super-profile of Real and Barca.

To youngsters it will seem strange that it wasn’t always like this. When another former Spurs player, Gary Lineker – top scorer at the 1986 World Cup – left Everton for Barcelona that summer, he disappeared from our vision. We relied on occasional reports of him stuck out on the wing at Camp Nou. Mark Hughes was signed by Barca at the same time. We did not hear much about him either. El Clásico 1986? Who saw it?

As recently as 2000 Lowe says he was referring to the match as “el derbi”, “and I think I might have still been doing that in 2003,” he said this week.

Then David Beckham arrived in Madrid. The word “Galactico” was already in the air then, like Sky tv’s growing coverage, the Easyjet flights that brought Spain closer to more and the Champions League theme tune that grew in resonance. Real, Barca, the Champions League, they are intertwined.

Three years earlier Real had purchased Figo from Barcelona for a world record €62 million. That not only caused huge controversy in Catalonia – and a pig’s head – it prompted a spike in interest outside Spain. Figo’s transfer can be seen as a catalyst in El Clásico’s shift from national to multi-national.

After Figo, Madrid bought Zinedine Zidane, who then scored the soaring winner in the 2002 Champions League final in Glasgow. And after Zidane, but before Beckham, Real bought Ronaldo (the original) from Inter Milan. Real’s white shirts joined our High Street.

Ultimately “Galactico” lost its lustre, but, as it faded, Barcelona began to glow. This month 10 years ago a 17-year-old called Messi made his debut. Two years later Barcelona won the Champions League, under Frank Rijkaard.

The injured Messi did not make the bench for the final against Arsenal but Andres Iniesta and Xavi were on it and when Pep Guardiola succeeded Rijkaard in 2008, a new Barca emerged around that trio – dynamic, mesmeric, poetic. There were more reasons to watch El Clasico.

The spikes in interest have kept coming: there were those four meetings in 17 days in 2011, when Barcelona triumphed in the Champions League semi-final and Real won the Copa del Rey.

Cristiano Ronaldo was part of Madrid’s story by then – another world record transfer – and Bale has followed. Isco’s not bad either.

As for Barcelona’s next trick – it’s Luis Suarez. The man who bites the hand that feeds is, like Ronaldo, not the first. Barcelona’s original Luis Suarez was known as “the architect” and once scored for Spain against Northern Ireland in the Bernabeu.

The 2014 version of Suarez goes by other names. But his presence tonight – and what a moment to make a comeback – will make more than Spain lick its lips.

There are reasons to be concerned about El Clasico – Is it based on debt? What does it do for the rest of La Liga? What about November’s postponed Catalan independence referendum?

But for 90 minutes tonight those will be set aside. In Spain, in Catalonia, and all across planet football.

On another, altogether different note, Alan Irvine is a 56 year-old white man who has been manager of Preston North End, Sheffield Wednesday and West Bromwich Albion.

Previously he had been a youth coach at Everton and Newcastle United, having started his coaching career at Blackburn Rovers.

That was in 1993, meaning Irvine has been in almost continual employment in coaching since hanging up boots some 21 years ago.

Given his playing pedigree and how he comes across as a mature, balanced individual in an industry with plenty of the opposite, Irvine’s longevity should probably not surprise.

But it stirred intrigue prior to last Monday’s 2-2 draw with Manchester United when West Brom’s chairman Jeremy Peace explained that he chose Irvine ahead of other more celebrated names in the summer because five years ago, when Roberto Di Matteo was appointed by West Brom, Irvine had applied for the post and met Peace. Irvine made an impression.

“We met Alan first in 2009,” Peace explained. “He came through our interview process very strongly, and we decided he would be a good fit for us.”

And there, in that small revelation from Peace, is an argument for the Rooney Rule.

The black manager’s complaint is not that they get sacked or lose out to rival candidates, it is that they do not even get in the door to show boardrooms who and what they are.

Irvine will have felt miffed when he lost out to Di Matteo, but at least he had been interviewed. He did not know then that, in a way, his interview had been successful.

This is what prospective black managers want: the chance to enter the room, to make an impression, to be remembered.