Premier League preview: a lack of big signings has left the Man United manager as surly as ever 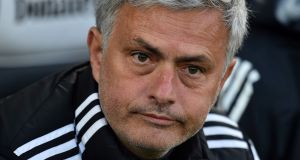 It was back in January that Crewe Alexandra whipped their supporters into a frenzy by tweeting, “some major transfer news coming up very shortly.... Guess Who?!?”

Some time later, all was revealed. The major news was that they were selling their best player, George Cooper, to Peterborough United.

It was a little like telling a kid that ‘Santa has brought a magnificent doll’s house! – for Shirley next door!’

Manchester United fans have had a similar time of it this summer, to the point where Shirley next door, in this case the reigning Premier League champions, are possibly sore from the laughing.

Time and again the club had BIG news, which would have left the faithful not unreasonably assuming that a galactico was about to sign on the dotted line, only for it to turn out to be something along the lines of a new mattress sponsor.

It happened again earlier this week. The BIG news? The club announced that it had agreed a multi-year global partnership with luxury blended Scotch whisky people Chivas.

“The collaboration will see the two global names join forces to celebrate their collective belief that blended is better – in life, football and Scotch,” they told their delirious supporters.

All summer it’s been the same.

BIG News! Sergej Milinkovic-Savic? No, the team’s new third shirt is made from recycled ocean plastic!

BIG news! Gareth Bale? No, the club had “elevated” its partnership with coffee company Melitta from a regional to a global agreement! (And there was even of a photo of Nemanja Matic, who was evidently ecstatic about the news, making a cup of coffee for a beaming Juan Mata).

BIG news! Ivan Perisic? No, the club announced that kitchen and bathroom specialists Kohler had become their first ever sleeve sponsor!

It was at this point that a person by the name of Steve Johnson replied: “I despair – credit cards, sleeve sponsors, watches, pillow and mattresses and even a bloody official tractor! How about announcing a ****ing centre back? Thanks in advance.”

‘Steve Johnson’ could, of course, have been a pseudonym for José Mourinho who might also have been the person who typed “Phil Jagielka? Make it stop” when United were linked with a move for Everton’s 76-year-old reserve centre back with mere hours to go before Thursday’s transfer deadline.

And to go from a shortlist of Toby Alderweireld, Yerry Mina, Jerome Boateng and Harry Maguire to Phil Jagielka was, more than a few noted, akin from going from 100 to 0 in your car.

That’s not to say the club’s summer transfer activity hasn’t been without some success. They did, after all, manage to loan Cameron Borthwick-Jackson to Scunthorpe United and Matty Willock to St Mirren, as well as sign Stoke City’s 35-year-old second choice goalkeeper who played three league games for them last season on their way to relegation.

There has been Fred too, in fairness, or ‘Frederico Rodrigues de Paula Santos’ as they’ll probably put on his shirt because ‘Fred’ would be too cheap on the replica shirt selling front, and 19-year-old full-back Diogo Dalot who has only been playing first team football since February and who arrived with a knee injury.

BIG News! “A brand new way to follow #MUFC this season and beyond. Download the Manchester United Official App!”

As a chap called Eamonn asked, “can it play centre back?”

And then he might well have poured himself a blended Scotch and watched as his summer transfer sorrows drowned.

Gordon D’Arcy: Where is Ireland’s progress under David Nucifora? 06:00
America at Large: David Villa and Neil McGuire complaints need attention 06:00
Johnny Sexton hopeful he will play on until the next World Cup 06:00
Darragh Ó Sé: Managers have steered three contenders to a better place 06:00
Seán Moran: Waterford give hurling an underdog story of its own 06:00