TV View: RTÉ lads struggle to get excited for a very friendly friendly

Bulgaria really pushed the boat out by selecting just nine -ovs, including two -evs this time around 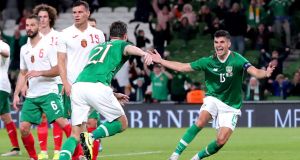 The inherent lawlessness of that element of the football-loving community that seeks out illegal internet livestreams to watch games that aren’t appearing lawfully on their tellies never fails to shock, and need it be said their delinquency should be roundly condemned.

But God almighty, were you watching the Swedish stream that showed our under-21 boys doing their almighty thing in Kalmar? Apologies, but: IKEA, Agnetha, Bjorn, Benny, Anni-Frid, Volvo, Ace of Base, the chef in the Muppets, Greta Garbo, your boys took a hell of a Parrotting.

Troy Parrott that is. The weight of our hopes and dreams now resting leadenly on the young fella’s shoulders. His fault. That finish for his second goal? Not since Damo and Robbie have we witnessed such delectable cheekiness in an Irish shirt. Unless you count those times Shane Duffy claims a penalty while sitting on his marker’s face.

Chuck in Aaron Connolly, Jayson Molumby and a clutch more of our young footballing people, and the future looks so bright it should be sponsored by Ray-Ban.

RTÉ, though, were contracted to show the friendly between our senior lads and Bulgaria, and in fairness to them they did their very best to put a brave face on it. Although when Tony O’Donoghue informed the panel the visitors were giving a debut to SFC Etar Veliko Tarnovo’s 37-year-old goalkeeper Hristo Ivanov, you couldn’t but sense a heavy-heartedness. “It’s starting to feel like a testimonial,” Kevin Doyle sighed, “it’s a friendly . . . but it’s too much of a friendly.”

Between them, the sides had made just the 19 changes from their last outings, Bulgaria really pushing the boat out by selecting just nine -ovs, including two -evs this time around.

Only Conor Hourihane had kept his place in the Irish team, Mick opting to wreck the fella’s head by giving him an outing at left-back, while presenting the captain’s armband to John Egan.

“How did he react to that honour,” asked Tony.

“As John Egan would,” said Mick, “’ah, grand, cheers, thanks gaff’, there wasn’t any great emotion about it at all.”

Tony, though, was highly emotional, the rebel in him rising. “With John Egan, Hourihane, Kevin Long and Alan Browne, that’s four Cork men in tonight’s team – and you can never have enough Cork people in the Republic of Ireland side.”

If he’d brought his flute he’d have been trying to drown out Amhrán na bhFiann with the Banks.

Back in the studio, though, Richie Sadlier wasn’t quite whipping us in to a frenzy, to the point where you’d imagine if he was a second hand car salesman he’d be telling his prospective buyers that their engine would most probably die half a mile up the road. Honest, like.

“Some international friendlies, they’re not great, the intensity can be quite poor, it can all be a bit flat … it’s as low intensity a pressure-free low-stakes game of football that you could possibly play.”

A downcast Darragh looked pleadingly towards Kevin for some giddy excitement. “Every player who starts tonight will realistically know that it doesn’t matter what they do, it can be the best game of their lives, they won’t be starting in the next game, bar injuries or suspensions.”

None there, then. Luckily, he had David Meyler to turn to. “This is more than a friendly – one, you’re representing your country; two, you need to go out and wear the shirt with pride and put in a performance.”

Then, before we kicked off, there was just time for a chat about Shane Long’s exclusion from the squad, Kevin gobsmacked by Mick’s decision, but lest he receive a Joe Brolly-esque RTÉ red card, he conceded that he was pals with the fella so his opinions might just be influenced by that fact.

Over to George Hamilton who spotted a man with a Bulgarian flag attached to crutches in the crowd, although we’re using the word ‘crowd’ loosely here. “An Irish team with 85 caps between them,” he said, just about resisting suggesting that there were as many caps in the stadium as fans.

The first half was muck, much as Richie had feared it would be.

“It’s a B team against a B team, with a very small crowd, there’s not much atmosphere or noise, there’s no intensity, it’s been played out like a couple of rungs above a training match, it hasn’t been great to watch ... as a spectacle, it’s not great.”

The second half, though, was mighty. Not Brazil 1970-ish mighty, but players broke sweat and scored goals, and that’s all you can really hope for from these occasions.

Two of the Irish goals came from Cork men, Browne and Long’s thoughts fancifully taking flight as they netted, Coventry-born James Collins adding some diversity to the list of scorers.

“A very tidy result,” said Jim Beglin, and that it was.

So, our B team did the job nicely, our under-21s left us giddy, Troy Parrott is confirmed as the second coming, what more could you ask for from a September Tuesday night?