TV View: Doyle, Duff and Sadlier all impress the múinteoir 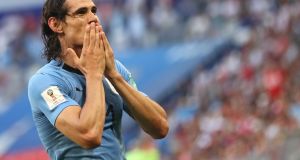 Edinson Cavani: spent much of the match when not clutching a limb and acting as a human roller for the turf, keeping the referee up to date with his innermost thoughts. Photograph: Wallace Woon/EPA

The mischievous glint in Gary Lineker’s eye suggested that something was afoot, and in the case of the BBC soccer anchor, that generally means he’s harbouring a well buffed one-liner that he’s just itching to share with the viewers.

The ‘ta-da’ moment came when he was delivering the team news regarding the Portugal team. “Hi, ho Silva lining,” he chuckled.

Andre and Adrien Silva were in the Portuguese starting team, Bernardo Silva on the bench. It offered a counterpart to the gravitas which the BBC panel brought to the pre-match discussion, particularly as they ‘bigged-up’ Iran, Alan Shearer saying that Iran had caused Spain huge problems and could have nicked a result in a previous group match at the exact moment that a statistic that they didn’t register a single shot on target against the Spanish popped up on screen. Timing, huh.

Mark Lawrenson, once of this parish, is like Marmite; he’s either to your taste or not, his whimsy and laconic humour in the midst of more serious observations polarising opinion.

This column likes the pithy comments, an ‘Auntie-dote’ to the more po-faced seriousness that tends to be misplaced at times. But even he was slightly awestruck at the beauty of Ricardo Quaresma’s first half strike that gave Portugal the lead, offering nothing more than ‘magnificent’.

Earlier in the day Uruguay took a giant pin to the party bubble that had enveloped the Russian team and public in the World Cup on the strength of their two opening victories in the tournament.

The manner in which they lost, as much as the defeat – both teams still progress from the group – sucked the atmosphere from the Samara Stadium as the hosts stumbled from one calamity to the next; soft goals, own goals and a red card.

The afternoon had started in more upbeat, if measured fashion, especially in the RTÉ studio, where Peter Collins, in his role as múinteoir, called on his ‘pupils’ Damien Duff, Kevin Doyle and Richie Sadlier to present their work to the viewers.

The homework was exemplary, Doyle on Uruguay, Duff on Russia and Sadlier on the nuances of the changes made by both sides and how it might impact on the upcoming contest. The only requirement for the television audience was to concentrate briefly; otherwise it is just a glorified roll call.

John Kenny and Ray Houghton provided the commentary, harmonious in approach in that each adopted a defined role, with minimal crossover. Kenny called the game, Houghton provided the analysis and the former Republic of Ireland international’s sharp observations and no-nonsense delivery, added value to the experience.

There is definitely a commentating metric when watching this World Cup. The entertainment quotient provided by the teams on the pitch has a direct correlation to the volume of match/player trivia that a commentator unleashes.

If there’s nothing much happening then the audience is going to be treated to a succession of statements that will have no material impact on their lives or the enjoyment of the match in question. If it’s a lively, entertaining affair then you’re never going to find out that Luis Suarez sang Nessun Dorma in a school play as a six-year-old. Disclaimer: he didn’t.

Houghton’s not averse to pinching a few stats from his microphone buddy. “Uruguay’s front two have 94 internationals goals between them,” or “in the last six matches they [Uruguay] have played, they’ve had six clean sheets.”

After all, needs must in a lull.

The match in a soundbite: Luis Suarez scored the opening goal of the match, Russia’s Denis Cheryshev’s was officially credited with an own goal, his teammate Igor Smolnikov was sent off for a second yellow card offence, although given the nature of it, it could equally have been given for stupidity, at least according to Houghton.

“If you are on a yellow card, you can’t go in for a challenge like that. He let himself down and he let his team-mates down. It’s hard to have sympathy.”

Edinson Cavani spent much of the match when not clutching a limb and acting as a human roller for the turf, keeping the referee up to date with his innermost thoughts. He scored Uruguay’s final goal in a 3-0 win.

Back in the studio Duff offered a clinical overview of proceedings.

“The sending off killed the game, over 50 per cent of goals in the World Cup have been scored from set pieces and it [the match] was a frustrating watch for the viewers.”

He was right on all counts.