It’s 47 years ago today since the famous Brazilian side drew a crowd of over 30,000 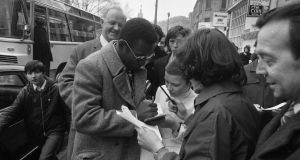 Brazilian start Pelé signs autographs on O’Connell Street during his stay in Dublin with Santos in February 1972. Photograph: Getty Images

Today marks the 47th anniversary of the day Pelé and his Santos team-mates drew a crowd of over 30,000 to Dalymount Park to play an exhibition match, one that didn’t quite live up to its billing.

Irish Times soccer correspondent, Peter Byrne, certainly felt that supporters didn’t get bang for their buck as the Brazilian side scored two late goals through substitute Alcindo to beat a combined Bohemians-Drumcondra selection 3-2.

Opening his match report in Monday’s Irish Times, Byrne wrote: “Some of the 30,000-plus crowd, who watched Santos labour to victory in Saturday’s exhibition game at Dalymount Park paid £2 for the privilege. Given the same opportunity tomorrow, I doubt if they would accept tickets at half that price.”

The game was far from headline news in a Monday edition dominated on the front page by news from Cardiff that Wales had decided to follow Scotland and not play that year’s Five Nations game in Dublin due to the Troubles.

Santos were on a whistlestop tour of Europe, including a 31-year-old Pelé, who was the main draw in a hectic schedule. In fact, the game at Dalymount was their third in a week after they followed a 2-1 defeat to Aston Villa on the Monday woth a 2-0 win over Sheffield Wednesday.

Perhaps all that effort caught up with Pelé and his team-mates as they certainly failed to hit the heights at Dalyer according to Byrne’s report.

“For the most part Pelé might well have been toiling in the anonymity of junior football as he sought to lift himself clear of the general level of mediocrity that made this a monstrous bore from start to finish.

“Long before the end, however, Santos, the one-time masters of club football, had become the faded aristocrats and Pelé, the King himself, had been reduced to something less than regal.”

Byrne was taken by Santos’ indifference for most of the second half.

“Given ample space in which to demonstrate their skills in an atmosphere conducive to exhibitionism, they trundled through the second half, unhurried and, seemingly unworried, by the fact that they were a goal down.

“The relief which greeted the facesaving scores by Alcindo, a halftime replacement for Manoel Maria, gave the lie to the theory that Santos were unconcerned, but surely it could have been more profitably displayed in a greater show of urgency on the ball.”

Television pictures from the match show the only urgency from the Brazilians came when the Santos players decided to end the game after Alcindo scored his second goal to give them the lead in the 88th minute as players , led by Pelé, ran for the tunnel under garda escort in a bid to avoid the pitch invasion.

The teams from the match were:

1 World Rugby study advises removal of reset scrums to reduce Covid-19 risk
2 Sideline Cut: Vignette shows why Bird is the true shark in The Last Dance
3 Ken Early: Liverpool fans, Bamber Gascoigne and a close shave in Istanbul
4 Coming fourth in the Olympics didn’t change this fearless quartet, time did
5 As news gets better, can the pull of The Field be resisted?
Real news has value SUBSCRIBE
Crossword Get access to over 6,000 interactive crosswords