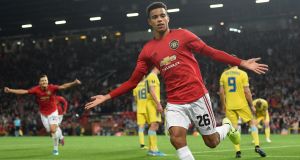 On his first European start the 17-year-old earned United the points with a coolly struck winner. Solskjær had said he was an expert finisher and here he proved it with an important first United goal, though it was significant that by the 73rd minute he was the only teenager left on the field.

With three inexperienced teenagers in the side and nine changes from the last starting line-up United had failed up to that point to take a grip on the game against limited opponents, leading to the conclusion that the present crop of youth products may not be quite as ready as the manager had hoped.

Solskjær had stressed the importance of winning the home games in the group, and as the champions of Kazakhstan are probably the weakest side United will face he will need to rethink his selection policy for future matches if he really wants to progress to the knockout stage. It was notable that United were best served by old hands such as Nemanja Matic, Marcos Rojo and Marcus Rashford. The last is hardly old at 21, though he was a man among boys in this starting line-up.

United signalled their attacking intentions from the outset, with Fred hitting the bar with a thumping 30-yard drive after just three minutes. Remarkably the diminutive Brazilian was not the smallest home player on the pitch, thanks to Solskjær giving a full debut to the even tinier Angel Gomes.

United should have taken the lead 12 minutes in when the 19-year-old’s corner rebounded invitingly off Axel Tuanzebe for Rashford, yet though the striker was onside and only a yard out, he found Nenad Eric in the Astana goal equal to his attempt to hook the ball over the line.

Making his first start of the season Phil Jones was caught out midway through the first half when Roman Murtazayev turned him neatly and set off towards goal, only to produce the tamest of shots straight at Sergio Romero.

All the pre-match attention had been centred on Greenwood’s elevation to the United front line, and though he did produce one shot narrowly off-target it was Rashford who caused most problems, especially when running through static defenders to reach Rojo’s lofted passes.

The old man of the United attack should probably have done better when the left back’s first invitation found him clear in the area, but his touch let him down when attempting to control the ball. The next time Rashford opted for a first-time volley, only to be denied again by Eric’s reactions on the line.

Even such a callow United side were clearly superior to their Kazakh opponents, Astana found it increasingly difficult to cross the halfway line, yet the longer the game remained scoreless the more hesitant and laboured the home side appeared.

For all their pressure they could count themselves lucky that Murtazayev is such a poor finisher, for after another Jones mistake had left Marin Tomasov in possession on halfway, the Astana forward was given another shooting chance and again put a weak shot far too close to Romero.

Rashford had another close-range chance at the end of the first half, again from Rojo but this time via a deflection, when to the disappointment of the group of home fans in the ‘away’ seats who kept up a barrage of noise throughout the game, he shot straight into the arms of the goalkeeper.

Arguably the most impressive of the teenage trio, Gomes almost created a goal at the start of the second half when he enabled Rojo to send a low cross right along the goalline, one that both Greenwood and Tahith Chong failed to reach for a tap-in at the far post.

When Fred forced a save with a free-kick after an hour it seemed to illustrate United’s dearth of attacking options and Juan Mata and Jesse Lingard were sent on shortly afterwards. Both were tangentially involved in the build-up to the goal, though it would be unfair to deny Greenwood the credit he deserves for a confident finish from an unpromising angle. – Guardian

1 Jim McGuinness: There is a way to save championship and make it competitive
2 Sordid murder of hurling brothers still resonates in south Galway
3 Klopp furious as injuries mount and VAR decisions prove costly
4 Nicky English: Waterford and Galway's task made harder by third week syndrome
5 Jackie Tyrrell: What ever happened to Austin Gleeson?
Real news has value SUBSCRIBE
Crossword Get access to over 6,000 interactive crosswords