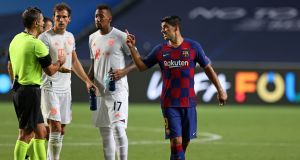 Luis Suarez is set to leave Barcelona, with his last match for the club likely to be an 8-2 defeat to Bayern Munich. Photograph: Rafael Marchante/Getty/AFP

Luis Suárez, Ivan Rakitic, Arturo Vidal and Samuel Umtiti have been told they are not part of Barcelona’s plans as Ronald Koeman’s cull begins. With pre-season training scheduled to get under way in a week’s time, meanwhile, the uncertainty over Lionel Messi’s future continues. There has been silence from him, despite reports last week that he had told the new manager that he feels “more out than in”. Aged 33, he has one year on his contract.

On Monday the Catalan radio station RAC-1 announced that Koeman had called Suárez to inform him that the club planned to rescind his contract and as the day went on the names kept coming. Rakitic, Vidal and Umtiti received similar calls telling them to leave. Philippe Coutinho, though, has been told that he will continue at the Camp Nou after a season on loan at Bayern Munich.

The names of Sergio Busquets, Gerard Piqué and Jordi Alba, conspicuously absent from the list of “untransferables” offered up by the president Josep Maria Bartomeu and all over the age of 30, did not appear on the list of those being shown the door – suggesting that there is a chance that they continue. The Catalan newspaper Sport reported that Alba, who renewed his deal last year and whose contract runs until 2024, has been told he will stay.

What happens now is far from clear. In the aftermath of Bartomeu’s strikingly short and public list of players who are “untransferable” – Marc-André ter Stegen, Clement Lenglet, Ousmane Dembélé, Nelson Semedo, Frenkie de Jong, Ansu Fati and Antoine Griezmann – Koeman had preferred to talk about an evolution rather than a revolution. There is also a significant difference between what the club plan to do and what they are ultimately able to do.

The lawyers and representatives of those who have been told to leave must negotiate an exit. In some cases, Barcelona hope to be able to complete sales but, having publicly admitted that they want to move players on, a more likely solution is the termination of their contracts – at a cost for the club. Rakitic wants to rejoin Sevilla but the Europa League winners remain reluctant to pay a fee. Barcelona’s wage bill is more than €390m a year and they are desperate to bring that down.

As for Messi, RAC1 reported last week that he had told Koeman he was not sure of his place at Barcelona, even though he was aware of the contractual ties that make a departure unlikely. Few clubs can afford him. His salary is the biggest in world football and his buyout clause is €700m although he can go for nothing at the end of this coming season and open negotiations with overseas clubs from January.

“It is a pleasure to have a player like Messi in your team,” Koeman told the club’s TV channel. Internally, though, some may not be averse to the idea of a departure if a significant offer arrived – which is far from clear. So long, that is, that it can be portrayed as purely his decision. On Monday evening, ESPN said that Messi’s camp denies he had told Koeman he wanted to leave. A battle to control the messaging may have begun.

Suárez, 32, also has a year on his contract, with an optional second which depends on the number of games he plays. He is the third-top scorer in Barcelona’s history. In an interview with El País this weekend he had said he believed he could still give Barcelona a lot and insisted he would accept a substitutes’ role, “as I have done throughout my career”.

He also said no one had told him he was on a list of players to leave and the “person responsible” should contact him directly, rather than his finding out through the media. On Monday morning, Koeman did just that. - Guardian