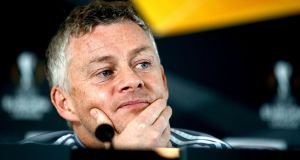 Ole Gunnar Solskjær has admitted the longer Manchester United are not in the Champions League the more the club will suffer.

United failed to qualify after finishing sixth last season under Solskjær, who took over as manager in December 2018. They are in the Europa League, facing Club Brugge in Thursday’s last-32 second leg after a 1-1 draw in Belgium last week.

On Tuesday United announced their net debt had risen £73.6 million to £391.3 million, primarily because of the loss of Champions League revenue. United can get back into the competition by winning the Europa League or finishing in the top four; their current league position of fifth will also suffice if Manchester City’s appeal against a two-year Uefa ban fails.

“We’re a big club, have got good finances, but the longer you’re out the more you suffer,” Solskjær said. “So it’s an ambition to get back into the Champions League – for footballing reasons and financially it’ll help the club. But we’ve got to focus on this competition, then the league on Sunday [at Everton], then the FA Cup [at Derby].”

Solskjær’s side are unbeaten in six matches, and have won their past two league matches.

“You need many, many attributes to play the perfect game or be the perfect team,” the manager said. “We want the swagger and confidence – not arrogance, but to be able to go out and believe in yourself. You’ve got to work harder and earn the right to win a game.

“I played with Becks [Beckham], Giggsy [Ryan Giggs], and one of the biggest compliments we had [from others], with a team full of quality was that we worked harder than others. I want my team to be one of the hardest working teams in the league. That’s the attitude you need, that’s what you’re supposed to do.”

Solskjær believes the requisite personality can be developed. “They can blossom more with confidence and by me speaking to them, managing them,” he said.

“As a player you want to be free, have courage, bravery [but] you want to have a bit of fear in you, want that taste: I don’t want to lose that game but you still want no worries, I’ll sort it out if I make a mistake.

“It’s a fine balance between arrogance, confidence, being humble. It is difficult to sit here and say in two minutes; you could speak about it for two or three hours.”

Bruno Fernandes has impressed since signing from Sporting in January – and has the character Solskjær identifies.

“He has that swagger. And his imagination, the pictures he sees, is a couple of seconds ahead of many players. One of his strengths is knowing what to do when he gets it. He can change his mind in a split second if that picture doesn’t work.

“Bruno gives us that little bit of a different flavour. He likes to play penetrative, forward passes, likes to take risks like a Man United player should do.”

Anthony Martial has scored in United’s past three matches, and with only Paul Pogba and Marcus Rashford injured Solskjær believes his squad is a different proposition from earlier in the season.

“We feel we’ve added some X factor and quality with Bruno, definitely. Also, with Anthony coming back – he was out for a couple of months [injured], getting used to playing number nine, getting used to the demands – Scotty [McTominay] has developed, Nemanja [Matic] fantastic, Fred as well. We want to develop that X factor.”

Luke Shaw is enjoying a run of impressive form, having missed four finals at United because of injuries and not being selected.

“It is a massive ambition for me [to play in the Europa League final],” the left-back said, before referencing United’s 2017 triumph over Ajax. “The feeling, even though I wasn’t on the pitch, was a feeling I have not felt, and I wanted more of.”

Brugge are without Emmanuel Bonaventure, who scored in the first leg, and captain Ruud Vormer because of injury. Éder Balanta is suspended. – Guardian

1 BBC to draw from well of nostalgia during barren months
2 Cheltenham faces criticism after racegoers suffer Covid-19 symptoms
3 Health official says decision to hold Liverpool-Atlético game was wrong
4 Son Heung-min to carry out mandatory national service in South Korea
5 Avoid the treadmill at all costs – marathon training in the 2km radius
Real news has value SUBSCRIBE
Crossword Get access to over 6,000 interactive crosswords