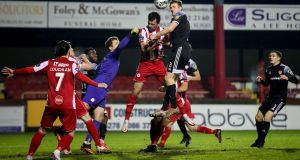 Derry City’s Cameron McJannett hits the crossbar with a header during the FAI Cup quarter-final against Sligo Rovers at The Showgrounds. Photograph: Tommy Dickson/Inpho

Ten years after winning the FAI Cup in a penalty shoot-out, Sligo Rovers booked their place in this year’s semi-finals thanks to a spot-kick win over Derry City at the Showgrounds on Wednesday night.

Ronan Coughlan, Alex Cooper and Garry Buckley all netted from the spot, as Derry missed the target on three of their four attempts.

A scoreless first half wasn’t lacking in intensity, with Derry’s high press putting Rovers under pressure in possession. As a result, the service to striker Ronan Coughlan was sporadic at best and aimless at worst.

Nevertheless, he did get through for the best chance of the first 45 minutes. It was the trickery of former Derry attacker Junior Ogedi-Uzokwe that created it, as he slid the ball in behind the Derry backline on 34 minutes, and Coughlan’s low strike was deflected wide by Peter Cherrie in the Derry goal.

At the other end, Irish U21 international Ed McGinty also had a straight-forward opening period in goal, as Derry enjoyed plenty of possession in good positions, but could not find any way through.

Rovers upped the tempo at the start of the second half, with Alex Cooper heading over from inside the area, before full back Lewis Banks got forward to force another decent save off Cherrie on the hour-mark.

Derry really should have opened the scoring with 10 minutes left, as firstly Stephen Mallon got in behind the Rovers cover but saw McGinty make a decisive save. From the corner that followed Cameron McJannet smashed his header off the crossbar.

They were to regret those misses as extra-time stayed scoreless and Sligo held their nerve from the spot kicks to advance to a semi-final against 2010 opponents Shamrock Rovers.