Luis Suarez had Barcelona ahead, but Messi missed the chance to kill off the contest 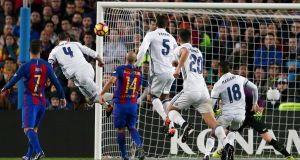 A last-gasp Sergio Ramos header secured a 1-1 draw for Real Madrid in the Clasico against Barcelona to maintain their six-point lead at the top of LaLiga.

The home side took a 53rd-minute lead thanks to a Luis Suarez header and had chances through Neymar and Lionel Messi to extend their advantage.

But Ramos punished them in the final moments to silence the Nou Camp and extend Real’s unbeaten run to 33 games in all competitions. For all the hype it had been a low-quality match, and one which certainly now gives Madrid the edge in this season’s title race.

Both sides had early claims for a penalty turned down. First, Lucas Vazquez appeared to be bundled over by Javier Mascherano before Sergi Roberto felt his hooked cross had been charged down by the arm of Ramos.

Isco was the first player to be booked for a foul on Neymar before Messi sent a fairly tame free-kick straight into the midriff of Real goalkeeper Keylor Navas, who had barely anything else to do in the first half.

Mascherano charged down a volley from Karim Benzema after Vazquez had the beating of Sergi Roberto down the left before Cristiano Ronaldo tried to stamp his influence on the game.

First he advanced into the box after Luka Modric sent him clear on the counter-attack, but Gerard Pique narrowed his angle to shoot and Marc-Andre Ter Stegen saved comfortably at his near post in the 37th minute.

Seconds later the Portuguese star nutmegged Mascherano but toe-poked a shot straight at Ter Stegen under pressure from Jordi Alba on the cover.

Barcelona screamed for a penalty again when Dani Carvajal appeared to block a cross from the left with his arm, but a disappointing first half finished goalless.

The Nou Camp erupted seven minutes into the second half when Neymar swung a free-kick into the area and Suarez found room to head past Navas from six yards for his ninth LaLiga goal of the season.

Alba did well to muscle Benzema out of possession when a chance to shoot seemed to have opened up for the Frenchman, while substitute Andres Iniesta quickly exerted his influence after coming on with an hour played.

First he picked out Neymar on the left of the box, and the Brazilian stepped inside Carvajal but blazed over. Then Iniesta hit the side-netting himself as Carvajal deflected his effort wide.

Iniesta’s next notable contribution was an eye-of-the-needle pass to Messi breaking right to left across the edge of the box with eight minutes to go, but the Argentinian screwed his shot wide as he tried to angle an effort across Navas.

Those missed chances came back to haunt Barca, Ramos heading powerfully past Ter Stegen as Modric’s inswinging free-kick from the left found him in space. It was a poorly defended set-piece from the hosts, with three Real players lurking unmarked.

Remarkably Barcelona almost snatched the lead back at the death as Casemiro headed clear off the line to keep out a looping header from Suarez to ensure the score finished level.