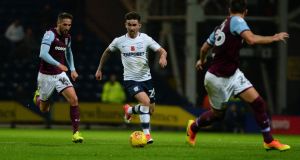 Preston North End striker Seán Maguire has been ruled out of the Republic of Ireland’s World Cup playoff games against Denmark later this month with a hamstring injury.

Ireland manager Martin O’Neill will also have to assess the fitness of centre back Richard Keogh after the Derby County defender went off with a thigh injury after just eight minutes of Saturday’s 4-2 Championship loss at home to Reading.

Keogh was replaced by fellow Irish international Alex Pearce at Pride Park, with Reading skipper Paul McShane setting up Liam Moore for the first of their four goals after nine minutes.

Derby manager Gary Rowett confirmed that his skipper had felt the injury in the warm-up and was touch-an-go to start the game.

“Keysey felt his quad in the warm-up and then felt it enough to have to go off,” said Rowett. “He builds our possession well from the back and so that was disappointing.”

O’Neill’s first-choice centre backs were both in action, with Shane Duffy playing 90 minutes for Brighton as they claimed a massive three points in a 1-0 win at Swansea. Ciaran Clark came on for Jamaal Lascelles after 55 minutes in Newcastle’s 1-0 defeat to a Bournemouth side that featured Harry Arter in midfield.

Maguire’s Preston team-mates were beaten 3-0 away to Ipswich Town, with David McGoldrick scoring one of the goals for Mick McCarthy’s side.

Earlier on Saturday, Preston confirmed that Maguire is to undergo an operation after suffering a similar injury to the one that has ruled out compatriot Greg Cunningham since the second week of the season. Maguire is “expected to be out for an extended period”.

Since making his debut for the club in August, he has scored four goals, the last of which against Brentford last weekend. He played the full 90 minutes in Wednesday night’s 2-0 defeat to Aston Villa.

The 23-year-old made his international debut as a late replacement in the World Cup qualifier win over Moldova , and his continued good form had left him in a strong position to feature in the November 11th and 14th playoffs.

After recently scoring his first goal for Bristol City in the Carabao Cup, Callum O’Dowda added a first Championship goal with a brilliant left-footed finish in the Severnside derby against Cardiff City at Ashton Gate.

1 Gordon D’Arcy: If Farrell can tap into our self-worth, we’re all on a winner
2 Winds of change as Ireland name a refreshed team, picked on form
3 Ireland’s 10 Test matches this year will decide World Cup ranking
4 Big paycheques lure the world’s best to Saudi Arabia
5 Saracens docked 70 points and interim CEO resigns
Real news has value SUBSCRIBE
Crossword Get access to over 6,000 interactive crosswords