Richie Sadlier: Phil Neville’s record adds up to tweet nothing 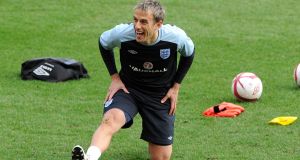 Maybe Phil Neville doesn’t hold any of the beliefs that his tweets suggest he does around women’s domestic roles and violence towards them. Photograph: Owen Humphreys/PA Wire.

What does a joke reveal about the person who tells it? Freud had a lot to say on this and wrote a book exploring his views, and many others have added to his body of work this week. While there are several theoretical approaches to take when exploring humour and wit, it seems there is little appetite these days for such a discussion. A joke, no matter the context, is never just a joke.

Phil Neville was named as the new manager of the England women’s team on Tuesday. He was a surprising appointment to some, an underwhelming choice for others, while many saw it as an affront to women and the campaign for equality.

1 Covid-19: Taoiseach warns of restrictions in Ireland’s cities as hospital cases pass 100
2 Dermot and Dave’s Dermot Whelan mindfulness exposed as sly act of self promotion
3 Brendan Gleeson as Donald Trump: ‘A mediocre impression and possibly a great performance’
4 Two turnkey homes for sale on same street as owners leave Dublin
5 Only someone who wouldn’t miss €50 a week would cut the PUP
6 Aer Lingus staff say they are living in ‘near poverty’ and unable to cover rent
7 Covid-19 cases higher in areas with large proportion of renters, CSO says
8 People asked not to cross Border as Donegal prepares for Level 3 restrictions
9 How Finland kept Covid in check and protected its economy
10 Diarmaid Ferriter: My advice to Government – stop hiring advisers
11 Dr Martin Feeley: Young and healthy majority need to be allowed to live
12 Thinking of take-out tonight? Here's the pick of Dublin's restaurant meals to go
13 Just four countries remain on green list: Where do we stand with travel now?
14 Highly-disturbed teenager who has threatened to kill mother due for release
15 North Korea regrets killing South Korean ‘to control coronavirus’
16 Fortnite owner in multi-million deal to buy Irish entrepreneur’s kidtech company
17 Donohoe says European Commission appeal of €14.3bn Apple tax ruling ‘expected’
18 Ireland faces devastating blow due to our failure to develop ferry services to Europe
19 Terror investigation launched after two wounded in Paris knife attack
20 Father speaks of ‘great courage’ of murdered daughter as man convicted
21 Séamus Woulfe: The last man standing in Golfgate is set to learn his fate
22 Mother refused meaningful access to teenage daughter in ‘profoundly sad’ case
23 Terrifying First Love reminds couples things could always be worse
24 Smoke from solid fuel fires and stoves killing 1,300 a year, EPA says
25 Covid-19 Q&A: How are we doing, is there any good news and what happens now?
26 Workvivo to create 100 new jobs in Cork as business booms
27 Covid-19: How Asian countries got contact-tracing right while European states are struggling
28 FinCEN Files: Dublin-listed fund sent $23m to firm suspected of links to Russian crime boss
29 Minister says ‘rules apply to everyone’ after MP pictured on train without mask
30 Coronavirus: Warning of similar measures for other counties as Donegal moves to Level 3
31 Leinster need to follow Munster’s lead and sign some marquee names
32 Five lessons I learned preparing my house for sale
33 Madrid vs New York: A tale of two cities during Covid-19
34 Lionel Messi hits out at Barcelona over Suarez exit
35 Five top tips for a perfect kitchen refurb
36 Donegal Covid-19 restrictions Q&A: What do they mean?
37 Dining out: 12 of Dublin’s best restaurants with outdoor spaces
38 Ireland is in danger of losing the woods for the trees on emissions reduction
39 Vatican cardinal resigns in wake of London property investigation
40 High Court told FBD staff texts discussed policies in ‘disparaging terms’
Real news has value SUBSCRIBE