Relieved Solskjær prepared for either Sevilla or Wolves 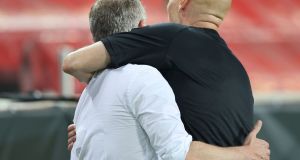 After the tie remained goalless for 90 minutes the manager’s introduction of Juan Mata for Mason Greenwood proved pivotal, the former’s pass to Anthony Martial leading to the winning spot-kick. Fernandes dispatched this for his 11th goal since joining in January and United now face the winner of Wolves against Sevilla on Tuesday.

Solskjær said: “I am delighted that we’re through. I think we deserved to win tonight. It could have been one of those nights that you ended up with a penalty shootout. They made it hard for us.

“It’s a good team we played against, well organised. They had a gameplan – we knew they were going to be hard to break down. We knew we would get chances.”

United hit the post twice and two finishes correctly ruled out for offside on a night when Karl-Johan Johnsson was superb in Copenhagen’s goal but could do nothing about Fernandes’s penalty, the Portuguese eschewing his trademark hop to strike the ball early.

Of United’s prospective opponent he said: “We know everything about Wolverhampton. I had a game against Sevilla with Molde [WHEN MANAGER]so I’ve got something to get back against them as well.”

Substitute Mata freshened things up for United after coming off the bench at the beginning of extra time, as United lacked energy in the final third in the closing stages of the 90 minutes. “The team is quite tired physically,” Mata said. “At this stage of this season it is important to win games like today and we go through. We want to stay in Germany for quite some time and hopefully we can win.”

Solskjær was asked about the claim of Michael Zorc, the Borussia Dortmund sporting director, who said Jadon Sancho, a United transfer target, would not be leaving in the current window. “I can’t comment on other teams’s players and I never do,” he said. - Guardian