By relying on a billionaire benefactor, the Football Association of Ireland is undermining the bond between fans and team 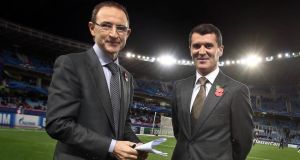 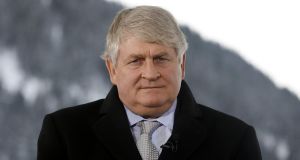 Denis O’Brien is a well-known philanthropist, and this week he saved John Delaney’s bacon. The chief executive of the Football Association of Ireland had the happy task of announcing the Republic of Ireland’s new “dream” management team, and, in an instant, long-running criticism of his stewardship dissipated.

The announcement is good for the FAI – still in serious financial trouble, with debts of €63 million – and Delaney was quick to praise O’Brien’s contribution, “without which this couldn’t have been done”.

From a purely footballing perspective it’s a good decision too. You can mount a case against Martin O’Neill or Roy Keane individually, but together, no. Their best parts represent the pinnacle of Irish soccer.

Yet many fans will have mixed emotions. Leave aside the question of how the news was trumpeted by Delaney on O’Brien’s Newstalk. You could point out that the radio station also tweeted confirmation of the deal before the FAI, but Delaney rejected a suggestion that there was a “quid pro quo media-wise” for O’Brien’s investment.

Leave aside also the issue of whether it’s appropriate that a businessman who has such widespread media interests should be so closely associated with what’s seen as a national asset, our football team. Though one might wonder if it creates a greater risk of self-censorship among sports journalists, the “fans with typewriters”.

Leave aside too O’Brien’s status as nonresident in Ireland for tax purposes, and the circumstances surrounding his securing of the second mobile-phone licence that was the initial fountain of his wealth.

The real issue, from the fan’s-eye view, is whether the Republic of Ireland management should be privately financed. Twenty-five years ago we were all part of Jackie’s Army, and the angling-loving manager appeared to have been paid largely with gifts of fish from fans.

These days it seems no one will do the job without a salary of €1 million, and to pay the bills the FAI must go cap in hand to a billionaire benefactor.

What exactly is the nature of the Republic of Ireland manager’s job? Is it a public office, like the Taoiseach’s? Plainly not. But it is a kind of representative position. The manager is the anointed leader of a movement over which there is an illusion of shared ownership.

Sport has always been divided into realists and romantics, and the realists will say all that matters is a winning team. Romantics, however, feel increasingly uneasy about money’s encroachment on the game.

Earlier this year, the football writer Simon Kuper wrote a confessional piece in the Financial Times about how he had “fallen out of love” with soccer. Describing the sense of alienation the modern fan feels in a world of Ferrari-driving players and Sky-sponsored hyperbole, he said: “Anyone who peeks behind the game’s curtain discovers there is no magic there.”

There’s a deeper phenomenon here, brilliantly explored by the philosopher Michael Sandel in his book What Money Can’t Buy, and it’s how public goods are devalued when a price is put on them.

A pertinent example is the creation of naming rights for sports stadiums, which Sandel points out has subtly altered the relationship of such communal venues with the public. “Imprinting things with corporate logos changes their meaning,” he writes. Citizens become service users.

Fans become consumers. Can any Irish supporters really say it makes no difference if they’re cheering at the Aviva Stadium rather than at Lansdowne Road? (The IRFU has a case to answer here, too.)

The FAI will argue that the deal changes nothing. O’Brien part-funded the previous management team, and, in any event, if the association wasn’t looking for money from individuals it would look for it from companies. And, by the way, it might add, it was the likes of Opel that paid Charlton’s salary.

One might liken O’Brien’s contribution, then, to that of a village shopkeeper buying up tickets for the local GAA lottery and then handing the prize back to the club. To this a sporting realist might add that the illusion of shared ownership is just that: an illusion.

But the romantic says differently: that the Republic of Ireland soccer team is public property – as much Joxer’s as Delaney’s. To sustain belief in the boys in green you need to feel that you are an equal part of the 12th man, the boisterous collective that is inextricably linked to the team’s fortunes.

It would be unfair to say the FAI has created a 13th man in O’Brien. But in soliciting this channel of funding, and in the process establishing yet another leadership team that is effectively beyond our means, the association has subtly altered the ordinary fan’s perspective of his or her relationship with the side.

And it comes when we are already somewhat alienated by watching players with the combined income of a small nation state, and by sitting in a stadium named after a company that has just hiked up our insurance premiums – again.

Peek behind the curtain of Irish football and you realise the FAI is not a democracy, and “we” are something of a charity case.

The head says “olé olé” but the heart wonders if romantic Republic of Ireland is dead and gone.

1 Ian O’Riordan: Awesome Bennett at the height of his considerable powers