Piqué lays into Barça over handling of Messi contract situation 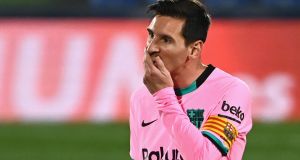 Barcelona defender Gerard Piqué has torn into the club over their handling of the Lionel Messi contract situation, which resulted in the forward attempting to leave in the close-season.

The criticism comes on the eve of the first Clásico against Real Madrid this season and two days after the 33-year-old Piqué signed a new three-year deal at Barça, with a vote of no confidence against the board also imminent.

Club president Josep Bartomeu was the target of a scathing interview by Messi, who ultimately ended up staying at the Camp Nou; however, the relationship between the two seems irreparable, something that has left Piqué astounded.

“I ask myself, how can it be that the best-ever player to have played the game, who we have been lucky enough to enjoy, wakes up one day and sends a burofax [recorded delivery mail] because he feels like he’s not being listened to?” Piqué told La Vanguardia newspaper.

“It’s all too confrontational. What’s going on? Messi deserves everything; the new stadium should be named after him first and then the sponsor. We should preserve our figureheads, not underappreciate them. It really gets to me.”

The defender also addressed media reports that Bartomeu knew the club hired a social media agency to criticise the players earlier this year.

Bartomeu has denied the allegations.

“I, as a Barça player, see that my club have spent money, money they’re now asking us for [in salary reductions], to criticise us – and I’m not talking about criticising people outside the club, but current players. It’s atrocious.

“I asked [Bartomeu] for an explanation and he said, ‘Gerard, I didn’t know about it,’ and I believed him. But then you see that the person who was responsible for doing this is still working at the club. That hurts me a lot. And I’m saying that here because I’ve already said it to the president, too.”

Ramos went off at halftime in Madrid’s 1-0 La Liga defeat by minnows Cádiz last weekend and was also absent as they crumbled to a depleted Shakhtar Donetsk side on Wednesday in the Champions League. However, he took a full part in training on Friday.

“He’s our captain, our leader. He’s over his injury, but obviously we won’t take any risks. He’ll be with us, you need players who are 100 per cent fit, and Sergio is,” Zidane told a news conference.

Despite welcoming back Ramos, Real will be without a number of first team regulars for the trip to the Nou Camp, including Eden Hazard, Dani Carvajal, Álvaro Odriozola and Martin Odegaard.

Zidane has come under intense scrutiny over the last week, with some reports suggesting his job might be at risk should they taste defeat in Catalonia. However, the Frenchman insisted he has the full backing of his players and the club’s board.

“I’ve won a lot with these players, they’ve won a lot for me and I’ll always be with them until the end, it’s they who battle, run and fight and I can feel their support,” he said.

“But right now the most important thing is changing the dynamic, and we’ve got good games coming up to be able to do that in, and that’s what makes football so great. When things go wrong, you need to show your character and quality.

“I can’t deny people are saying my future is at stake, but it was the same last year and it was like that in my first spell here, too. I just need to do my job and forget about everything else.”

Barcelona, meanwhile, have the returning Jordi Alba available for the game, but will be without long-term absentees Marc-André ter Stegen and Samuel Umtiti.

1 Keith Duggan: Through the glories and the disgraces, we were all Maradona addicts
2 Diego Maradona dies of heart attack, aged 60
3 Darragh Ó Sé: Cork and Donegal went out with the wrong attitude
4 Andy Farrell to delve deeper into Irish squad for team to play Georgia
5 Gordon D'Arcy: I know what Joe and Cheika would do. Fix the basics
Real news has value SUBSCRIBE
Crossword Get access to over 6,000 interactive crosswords