Piqué in the thick of Catalan rivalry again after celebration 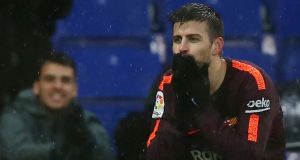 They were seven minutes away when Gerard Piqué appeared before them, a finger on his lips in the rain. “It was symbolic,” he said, and he made sure of that.

After Barcelona’s defeat to Espanyol in the Copa del Rey, Gerard Moreno’s header left them on the verge of a league loss after 21 matches and almost six months, to deny a new record. The water level was rising and the clock was ticking: 80, 81, 82, 83. And that was when Piqué reached the ball, sent it past Diego López and in.

Leo Messi had come off the bench for the final half hour, and it was his delivery that had made it. When the ball hit the net, Ernesto Valverde became the manager with the best unbeaten run in Barcelona’s league history, the record clinched at the place where he has a gate named in his honour and his portrait hangs on the wall.

Philippe Coutinho was back at the ground where he once played, and he thumped the best shot of the afternoon against the bar, but it had to be Piqué. As his header went in, he turned towards the Espanyol fans and gestured for silence. So they started shouting again.

Few Barcelona players feel the Catalan rivalry quite like Piqué. It is an uneven one and it’s tempting to suggest few of the Barcelona players really feel it at all. Which, at heart, is partly what is at play here and is certainly what Piqué played upon. Barcelona’s dominance stings, he knows. Espanyol fans feel ignored, like they are invisible in the city and across Catalonia, where the second most popular team is actually Real Madrid. Numerically, it is true, they are comparatively few and while they have tried to make a virtue of that, it is inescapable. “You’ll never understand,” one Espanyol line has it.

“They call themselves the ‘marvellous minority’; I hope they fill their stadium one day,” Piqué once said after they met in early 2016. A few days later, he posted a video alongside a message that said “you’ll never understand”. The video showed Espanyol fans chanting at him: “Shakira is a whore” and “Milan, die”. Milan is his son. Recent clashes have been tense and sometimes nasty – another banner declared “Pau, your foot shows us the way”, after Espanyol’s keeper had trodden on Messi – and that provided some of the backdrop to this weekend’s game, for Piqué especially. He, in turn, provided the rest.

When Espanyol beat Barcelona in the Copa del Rey, they erupted. Sergio Busquets accused them of celebrating too much. When Barcelona won the second leg, knocking Espanyol out, Busquets said things had been “put back in place”. For many Espanyol fans, it was another illustration of how they feel looked down upon, how their identity is bound up in the fact that FC Barcelona, named as they are and projected as a symbol of Catalonia, eclipse everything and deny Espanyol status as a club that represents the region, nation and city. They have long felt ignored by the authorities. Or worse: sneered at, dismissed.

Named because they were founded by Spanish students, not as a rejection of Catalanism as is often assumed (although the two club’s political identifications would become very different), Espanyol Catalanised their name in 1995, when they added “of Barcelona”. But in 2009, after over a decade as tenants at the Olympic stadium Montjuic – their former home of Sarriá an increasingly distant memory, loved and lost – Espanyol moved to a new stadium outside the city, almost 20km out past Esplugues and Hospitalet, on a plot that straddled Cornellà and El Prat. And after the derby in the cup, Piqué referred to them as Espanyol de Cornellà instead of Espanyol de Barcelona. That, too, stung.

Espanyol complained, accusing Piqué of inciting violence and xenophobia. “If anyone doubts where Espanyol was founded, just look at our badge,” Moreno replied. “We’re proud to play in Cornellà-Prat”. The tension grew but on the eve of the derby, there was an attempt to calm things down. Valverde insisted: “They’re from Barcelona, and that’s it.” He posed with his opposite number Quique Sánchez Flores. There were appeals for good behaviour, for the worst of the chants to be avoided. “Pride puts the fans on alert,” Sánchez Flores explained. “We represent a feeling and our people often feel trodden on.”

On Saturday morning, Espanyol took out an advert in the sports dailies that ran as a list: “RCD Espanyol de Barcelona,” it began. “RCD de Cornellà, RCD de Prat, RCD de Sant Adrià”, it continued. RCD belongs, it concluded, to “the rich, the poor, the strong, the weak, to you. To all those that dream”.

By Saturday afternoon, they were dreaming of another derby victory. When they famously denied their rivals the title a decade ago with Raul Tamudo scoring a late equaliser at the Camp Nou, it was a night described by one headline as the Shag of the Century, but there had been little joy since.

Eighteen league derbies had gone without a win. Now, though, Moreno’s header put them in the lead in a week in which the club’s director general admitted there may be sales in the summer . Moreno, superb all season, has now scored almost half of Espanyol’s goals. Few were as important as this seemed set to become.

For Barcelona, it looked to be the end of the run. The pitch was wet, heavy, and Valverde admitted his team had to hit the ball long. Nor, though, did it seem a huge drama, even with the rain, the fouls and the protests and the five yellow cards. Madrid had drawn, Sevilla had lost, and Valencia were playing Atlético that night. But then, on 83 minutes, Piqué scored, the record was claimed and Espanyol’s opportunity gone. “This draw feels more like two points dropped than one gained,” Sánchez Flores said.

For Piqué, it was a point made before the chants about his family came. (And it’s concerning so few see the deeply offensive nature of those chants). Moreno went in hard on Piqué and there were confrontations. In the tunnel afterwards, the referee reported there had been arguments, “but no physical aggression”. Samuel Umtiti had been pulled away as they departed, Piqué imposing peace. He reportedly said Sergio García had referred to his colour in one exchange, a comment García has denied making.

Afterwards Piqué said: “It was special to celebrate the goal after what happened this week. If it’s me, I don’t care, but it’s my wife and family. It’s been happening for a long time now and it’s not just a few people. If nothing is done and nothing is said by those at the club who are in charge then everyone’s responsible. We’re all people and there’s a limit to everything.”

Espanyol midfielder Esteban Granero responded: “If you don’t show respect, you can’t expect respect.” “It’s an ugly act but it’s his,” Moreno said. “Piqué’s celebration is part of the rivalry,” Valverde added. “You can’t silence the fans, still less ours,” Sánchez Flores insisted. “The gesture is what it is but our fans will rise above it.”

“I tried to get back at them, using sarcasm and it seems it worked – that’s why they spent a fortune [ON ADVERTS],” Piqué said. “A lack of respect? They complain about me calling them Espanyol de Cornellà and not about them insulting my family? That’s a lack of respect. They didn’t need to take out an advert to say they’re from China, Italy, Spain, or Tabarnia. They’re ever more uprooted; they’re from Cornellà and they have a Chinese owner. I know what I said hurt them, but it was true.”

Not exactly. One end of Espanyol’s stadium stands in Cornellà; the other stands in El Prat – and it was there that Piqué scored and raised a finger to his lips.

*It has since emerged however that the Catalan defender’s goal celebration will be examined and he could remarkably face a sanction.

According to La Liga president Javier Tebas, if the Spanish football federation’s competition committee deems Pique’s actions punishable, the Spanish international could face a suspension of up to three games.

“The committee will rule if the gesture is punishable, but we will take it to them so they can make a decision,” Tebas told reporters. “The regulations mean that certain ways of celebrating goals can be considered provocation.

“We have to highlight the fact Espanyol worked well and until that moment, Pique’s goal, there was not a single insult aimed at Pique’s family, which is something we were worried about at La Liga.

“His provocative gesture made the fans react and come out with insults, which are intolerable.

“(The shushing celebration) has been done before but on few occasions has it generated widespread irritation. We should avoid celebrations that irritate people.”

1 ‘A radical departure’: Who are CVC and what are their aims with rugby?
2 Ken Early: Ken Early: Why international football is fading into obscurity
3 Connell losing touch with club championship is real tragedy of Normal People
4 All in the Game: Nigeria bite back in war of words with Redknapp
5 Colin Kaepernick’s exile is too fresh for NFL to speak out on US protests
Real news has value SUBSCRIBE
Crossword Get access to over 6,000 interactive crosswords