Wexford Youths on high ahead of Shamrock Rovers visit 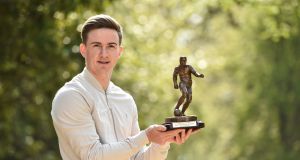 Stirred by their 4-2 win at Longford Town on Tuesday night, which lifted them out of the bottom two in the Premier Division table, Wexford Youths await the arrival of Shamrock Rovers at Ferrycarrig Park tonight with added relish.

Though they lost 2-0 to Rovers at Tallaght Stadium in March, Youths’ manager Shane Keegan felt that his side might have got something that night but for an goalkeeping display by the hosts’ Barry Murphy.

“We played some super football at times and the work rate was through the roof,” said Keegan of his side’s big win at City Calling Stadium. “If anybody doubted the belief or commitment of these lads then they got their answer.

“Shamrock Rovers have one of the most talented playing squads in the league, but [tonight] they will be just another team that we believe we’re capable of taking on and giving a real fight.

“Our performance in Tallaght showed that, while we respect them, we won’t fear them.

“Barry Murphy was in inspired form that night and the lads are looking forward to having another crack at them,” added Keegan who waits on striker Danny Furlong who shipped a knock at Longford. Peter Higgins, Lee Grace and Aidan Keenan remain out injured.

Rovers, also coming off one of their better displays of the season in beating Sligo Rovers 3-0 on Tuesday night, have defenders David O’Connor and Maxime Blanchard back fit, leaving left-back Luke Byrne their only absentee.

“Sometimes you’ve just got to do that. It’s can’t be always pretty football,” said Dundalk midfielder Ronan Finn, announced yesterday as the SSE Airtricity/Soccer Writers’ Association of Ireland Player of the Month for April, of the latest victory.

1 Ireland backrow of O’Mahony, Van der Flier and Stander to be retained against England
2 Triple bogey costs Rory McIlroy as Adam Scott prevails at Riviera
3 Newcastle feel the heat as Arsenal get some of their old mojo back
4 Gambling advertising in sport: How much is too much?
5 On healing and wild hurling: The re-education of Diarmuid Lyng
Real news has value SUBSCRIBE