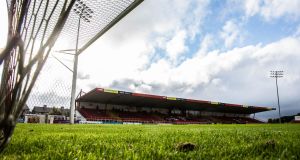 Drogheda boss Pete Mahon believes his side regained their “self-respect” with Saturday’s draw in Sligo.

Sean Russell’s wonder goal on his Drogheda debut was cancelled out by Rhys McCabe’s first goal for Rovers.

But the point brought an end to a four-game losing streak for Drogheda, and Mahon was proud of his players.

“I feel that we got a bit of self-respect back there tonight after a horrendous couple of weeks. We had a lot of problems on and off the pitch. But overall I think the team is a bit more galvanised now, a bit more together.”

Russell’s 51st minute strike was only Drogheda’s second goal in their last ten games, and Mahon admitted it was a bit special.

“I told him to retire after the game, because he won’t score another goal like that.”

McCabe weaved his way into the box from Raffaele Cretaro’s pass, and slid the ball past Stephen McGuinness on his Rovers debut to level things up, while Daniel Kearns thought he had won it shortly after but his effort was ruled out when the referee’s assistant adjudged that the ball had crossed the line.

The point was enough to take Rovers back out of the bottom three, but boss Gerard Lyttle was left frustrated.

“These things happen when you are down on luck. You have keepers pulling off world class saves; we had chances we missed; Dan had one come off the crossbar; we had a disallowed goal which in my opinion was a poor decision.”