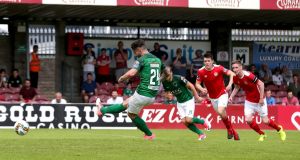 Despite the attraction of Thurles, 2,405 were at Turner’s Cross to see Cork City continue their astonishing winning run in the Airtricity Premier Division, Seán Maguire’s penalty just before half-time securing the points for the Leesiders.

A contentious decision by Ben Connolly for Billy Dennehy’s adjudged push in the back of Steven Beattie saw tempers spillover down the tunnel, and Owen Garvan was sent off on his competitive debut for Liam Buckley’s men.

The Saints barely had a sniff following the sending off, and only for wasteful finishing, combined with some spectacular goalkeeping from Conor O’Malley, kept it to a single goal scoreline.

A first half full of chances saw its first less than a minute into the encounter, as Ryan Delaney’s heavy touch from a misjudged Mark McNulty short ball saw Graham Kelly rob the Burton Albion loanee, but the netminder was quick off his line to smother and redeem the situation.

At the other end a sublime through-ball from the outside of Kevin O’Connor’s left boot played in Karl Sheppard, who opted to shoot early from the edge of the box. His effort was tipped brilliantly onto the post by O’Malley, who had to be quick off line to smother Maguire after he robbed Lee Desmond.

Space opened up for the hosts following Garvan’s sending off, and after Conor McCormack fired a low shot just past the post, substitute Achille Campion, on the pitch mere moments, blasted over an open goal from eight yards out, unable to reward Stephen Dooley’s fine run.

The second half was all one-way traffic, and Maguire’s clipped cross-come-shot rebounded off the inside of the right post before Campion’s handball denied him the chance of finishing the rebound.

O’Malley was having a stormer though; an incredible double-save to deny Kevin O’Connor’s free-kick and Maguire’s follow-up the highlights, but not enough to stop City making it 19 wins from 20.