Former Bohemians and Ireland midfielder has died aged 73; tributes to be paid at Dalymount Park on Saturday 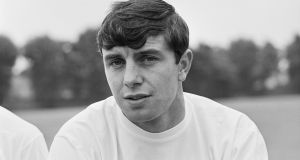 Former Bohemians and Republic of Ireland midfielder Jimmy Conway has died at the age of 73, it has been announced. The Dubliner, who was one of five brothers to play for the club, spent two seasons at Dalymount Park before heading to London where he settled with Fulham, the club he spent the best part of his career with.

Conway earned 20 senior international caps, scoring three goals, between 1966 and 1977. He also has a short stint at Manchester City and a loan spell at Athlone Town before moving to the United States where he played and then coached at Portland Timbers.

“I am very saddened to hear of Jimmy’s passing,” said FAI deputy chief executive Niall Quinn. “One of my earliest FA Cup memories is watching the 1975 final when West Ham beat Fulham 2-0 at Wembley and Jimmy was the only non-English player on the field. I can remember being so proud to see an Irishman playing in the FA Cup final, it was an inspirational moment.”

Conway will be remembered before kick-off at Dalymount on Saturday afternoon when Bohemians take on Shamrock Rovers in a highly anticipated first Dublin derby of the new season (kick-off 2.0).

“A Dublin derby is great to kick off a season,” said Rovers manager Stephen Bradley. “There’s always a buzz and it’s obviously sold out. It’ll be a typical derby game and one that we’re looking forward to. Bohs finished third last year and have a really strong squad

“It’s a long off-season for the players. They just want that first game to come around. Seán Kavanagh is the only injury, everyone else is okay.”

The game will be an early test of Rovers who were beaten three times in the league by their cross-city rivals last season, something various members of the team have accepted they cannot afford to allow happen again.

The hosts are close to full strength with only 20-year-old Cristian Magerusan ruled out. The Romanian-born striker missed the entirety of last season with a cruciate injury and, sadly, is said to have suffered a similar problem during the club’s pre-season.

1 ‘Manchester United are lucky to have you’: Klopp responds to Donegal schoolboy’s letter
2 Iain Henderson ruled out of Ireland’s Twickenham visit
3 United greats in attendance as club hero Gregg laid to rest
4 Eddie Jones: back three will deal with Irish aerial threat
5 Liam Toland: Larmour can distract England while others flourish
Real news has value SUBSCRIBE