New-look St Patrick’s have shine taken off by Galway 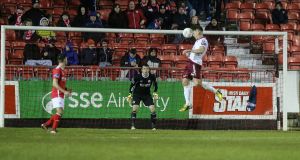 It might be just a little too early to make any sweeping judgements on this new-look St Patrick’s Athletic side but it is safe to say on the evidence of this that there is plenty of work for Liam Buckley and his men to do if this year’s tilt at the title is not to go much the same way as last year’s.

On their first outing of the new season they dominated without really causing their visitors any serious problems through the first half then led for a while before completely letting the game slip out of the grasp.

For quite a while, the performances of both Dennehys, Darren and Billy, seemed set to fill the home fans full of hope for the season ahead but the former has to take his share of the blame for the simply awful defending that allowed United their first two goals while the latter couldn’t quite deliver when it mattered in the way so much of his approach play suggested he might after laying on Christy Fagan’s opener shortly after the break.

The striker turned it home with a lovely glancing header from close range at which point the most likely scenario seemed to be that Buckley’s men would take advantage of Galway’s need to come out in search of an equaliser by getting in behind them and getting another goal or two.

Instead, Galway began to press for the equaliser and the locals forgot how to defend. Vinny Faherty’s equaliser just short of the hour was a remarkable affair with the striker, returned from Limerick where he scored quite a few goals in a team that was going down, working his way in almost unchallenged from an implausibly tight angle after Stephen Walsh had taken a throw in on the left.

Fagan, with his last touch of the night, went close to restoring the home side’s lead but Conor Winn made an astonishing save from point-blank range with the goalkeeper somehow getting an arm out behind him to scoop the ball to safety after the striker looked to have done everything right.

Dennehy, Sean Hoare and the rest of Buckley’s defence had looked really assured through the first half of this game but they were nowhere for what was a fairly basic set piece and suddenly it was St Patrick’s who were chasing the game.

With seven minutes to go, they gave that a brief go but it didn’t end well.

A spell of pressure ended with Galway breaking and Enda Curran, who had started the night on the bench then come on before half-time when Gary Shanahan was forced off by what may have been a concussion, hit number three with a powerful right footed shot from just inside that area that left Brendan Clarke helpless. Before the net had stopped rippling, the ground was emptying and some of those who had stayed in their seats had started to boo.

Buckley will take some heart from the potential that Billy Dennehy showed during those opening exchanges when he was the only one of his players to get behind the defence and provide Fagan with an sort of menacing ball but Dunne will have taken an awful lot more on the journey home from the three points.

1 Ireland to stick with winning formula against England
2 Should fans be allowed drink in the stand at sporting events?
3 Lewis Ludlam eager to make his presence felt for England
4 Man City banned for two seasons from European competition and fined €30m
5 Newman expected to survive fiery crash at finish of Daytona 500
Real news has value SUBSCRIBE